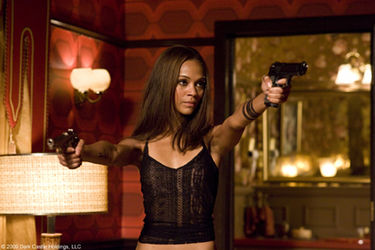 
The Losers, based on a comic book, gives us more of an "A Team" (it will be on the screen in June) structure and atmosphere than an over the top comic page. Early on the script provides hyper motivation for the five undercover sort of CIA guys to go after Max, nicely played as a very unfeeling comic book bad guy who only has his eyes on the prize for himself.

Action is the theme, and the basis for the revenge falls out early for us to watch. While an attack is set up by the five, a judgment by their leader Clay (Jeffrey Dean Morgan) to call off the air attack at a Bolivian bad guy’s compound because he observes twenty five kids entering the building his suggestion is rejected by Max their contact. With a little twist Max takes out the little kids assuming he is ridding himself of the five heroes. What a perfect fit for revenge.

Following a one on one battle with Clay in which she holds her own, Aisha (Zoe Saldana - Avatar, Death at a Funeral) is allowed to join the gang, particularly when she offers to bankroll the entire operation which as we witness must have been costly.

While Max in his powder blue pin stripe suit gives out orders to kill anyone who doesn’t perform, he shows he is a tough job performance evaluator, but for some reason his henchmen stay with him. I always wonder why these quiet guys just follow orders and continue with a dastardly criminal when it is known they will die if they make one mistake. Max is working on green destruction, it kills and destroys without creating pollution. All this under his Golaith mega building company. The hard drive secret is attacked by Jensen (Chris Evans).

Zoe makes a different use of coffins here than in Death at a Funeral but characters move out of the last resting containers which are supposed to be filled with the dearly departed. That begins the revenge which could be called "Get Max".

While Losers doesn’t attempt to be a top shelf film, it brings a world of over the top adventure with massive explosions, an intimate scene with Morgan and Saldana, chases, twists, and any excuse for violence whether it makes sense or not. It is just we expect a noisy flashing blast on the screen with good macho guys going after those who would destroy the world to gain power and money.

They also make us laugh at Pintos and pink shirts with petunias on them. Without thinking very hard we can enjoy The Losers.