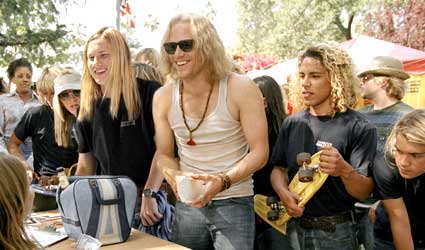 This fictionalized version of Stacy Peralta's acclaimed documentary Dogtown and Z-Boys will appeal to skateboarding afficianados and fans of pictures like Blue Crush. It is set in the Venice Beach area in the mid to late 1970's and has attitude for the legends who revolutionized a sport. Lords of Dogtown is ignited by thrills from surfing around the Pacific Ocean Park, once a vibrant amusement area in the 60's like Coney Island.

Catherine Hardwicke's film has a gritty, unpolished texture to it in the look and approach like her potent female adolescent drama Thirteen. That film's co-writer and co-star, Nikki Reed, plays the sister of one of the the asphalt surfers, Tony Alva (Victor Rasuk).

Besides New York native Rasuk looking somewhat like Ricky Martin, the late adolescent leads include Emile Hirsch (The Girl Next Door) as Jay Adams, and John Robinson (Elephant) as a reflective and quietly sensible Peralta himself. Heath Ledger closely resembles Val Kilmer in his portrait of paternal Skip Engblom, who oversees the Z-Boys rise to fame from ordinary partying surfing buddies. Often partaking in drugs and/or alcohol, the colorful Engblom helped give these teens their start as a co-founder of the Zephyr surfing and skateboarding shop designing the equipment and setting up the team.

Lords of Dogtown opens with some nifty graffiti credits as it immerses one in 70's cultural mores as Southern California feels tougher and more urban angst-ridden. The screenplay by Peralta from a 1999 Spin Magazine article is episodic but captures the spirit of discovery and experimentation from the urethane wheels that helped began a craze during a drought that had mostly rebellious kids practicing in swimming pools (and sneaking into homes, too). The trend also drew girls to these often shirtless riders, audacious in a style that gave them more than a vertical high. It was ingrained in their lifestyle, which was fluid like Peralta, but more reckless in the case of Adams.

The media and commercial prospects for these guys soar, though Hardwicke does better in depicting the physical nature of the sport with Alva providing stunt choreography than with the interaction of the actors. They are promising talents, especially Hirsch as the most self-destructive of the trio whose acting approach is similar to Leonardo DiCaprio, but not very charismatic like the aggressiveness of doing jumps and turns with one arm outstretched.

Handheld cameras offer tight close-ups and a vertiginous feel is brought about from the dangers of the sport with quick cuts that may distance some viewers. Hirsch invests Adams with some of the brashness and vulnerability in Imaginary Heroes, especially in his scenes with his addled, unglamorized factory-working mother (Rebecca DeMornay of Identity). Another of the core skaters is Michael Anagrano's Sid who is less talented but is Jay's friend and is made fun of initially because of an inner ear condition. Reed's skater chick wants Stacy to go to parties but is lured by wild child Jay. But, the dramatic result is a little sensationalized like the editing and detracts somewhat from the captivating sequences which would influence contemporary extreme sports like snowboarding and skysurfing.

Robinson is nicely suited for the long blondish Peralta, the best in terms of the sport's marketing, and Johnny Knoxville (Jackass) is a wealthy scummy businessman who lures Alva from the Zephyrs and helps lighten things up. And those into the sport will get a kick out of founding father skating figure Tony Hawk as a vertically-challenged astronaut.

Cruising often in its dynamic atmospheric way to the climactic "Dogbowl", this darker Dogtown doesn't hug the cinematic landscape as smoothly as it did when Peralta was behind the camera. But, the washed-out kinetic urban beach vibe captured by Hardwicke, a surfer herself and distinguished production designer, and her lenser Eliot Davis is a vivid ride down memory lane that was a bumpy one for those who lived it.