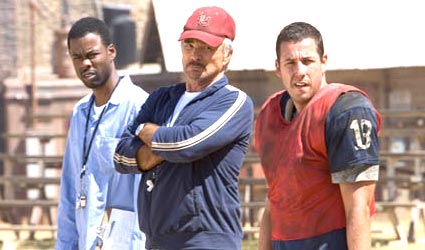 
"If you can't get out, get even" is the tagline for the new Adam Sandler comedy The Longest Yard, and this restoration should please his fans who didn't like his more grown-up work in the James L. Brooks dramedy, Spanglish.

Sandler is in his element again with his "Happy Madison" core group led by Jack Giarraputo and Tim Herlihy, and reteams with his 50 First Dates and Anger Management director Peter Segal. There isn't the outlandishness of The Waterboy, though Sandler gets into the gridiron mentality again with the help of former NFL quarterback Sean Salisbury to inhabit the Burt Reynolds role of ex-MVP Paul Crewe. Thus, some suspension of disbelief is needed, but maybe not as much considering who the star/executive producer has around him.

Much cynicism is injected into Crewe by Sandler from Sheldon Turner's very similar screenplay of the original by Tracy Keenan Wynn. His fall from grace and the league comes from participating in point-shaving. A big pile-up during some joyriding in the Bentley of girlfriend Lena (Courteney Cox) gets Paul incarcerated in a Texas prison with some scary inmates.

The film is diagrammed from the pressures Crewe inures, dealing with a wicked guard (William Fichtner of Crash) and a self-centered warden (James Cromwell). The taunted prisoner in time will put together a motley crew of a football team from the convicts to go up against the guards.

An intermittently hilarious Chris Rock (also in Madagascar this week) is the Caretaker, who has connections to the outside world, keeping the prison wired. Burt Reynolds has much more than a cameo as the old-time coach Nate Scarborough who the inmates transform into the Mean Machine.

Segal brings a gritty look to this prison/gridiron milieu shooting mainly in New Mexico before wrapping in Los Angeles. The hard-hitting action is brought to the forefront by sports coordinator Mark Ellis that makes the latter brawl of a contest appealing to Sandler's demographic which probably extends into the wrestling arena.

While this probably unnecessary Longest Yard is hardly comic poetry, the roughness by the likes of Bill Romanowski, Kevin Nash, Brian Bosworth (the guards), and wide-out and running back respectively by Michael Irvin and rap star Nelly often collide with positive results.

It goes the extra distance with Sandler and Reynolds connecting better than expected as Rob Schneider gets his obligatory cameo. And, if the sentiment keep it from being a gut-busting blockbuster there are some good scene stealers from SNL alum Tracy Morgan in full cheerleading mode and Cloris Leachman (Spanglish) as the warden's lascivious secretary, Lynette.