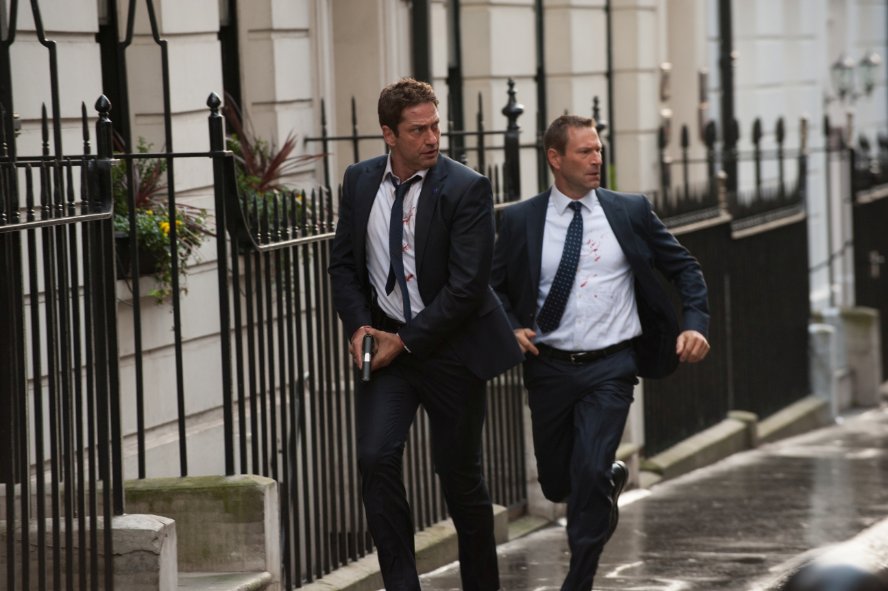 
Preposterous, supposed follow-up to the 2013 terrorist thriller Olympus Has Fallen helmed by Iranian Babak Najafi pushes all the jingoistic buttons which obviously is far more irritating than fun in trying to ingratiate itself to the many taken with violence awaiting Americans overseas like Taken.

The funeral is of utmost importance to U.S. Secret Service director Lynn Jacobs (Bassett) who flies into London with Pres. Asher (Eckhart) and his personal security stalwart fellow Mike Banning (Butler, the star of Olympusand currently in the mythological Gods of Egypt) fly into London where ensuing chaos hits the metropolis. A handful of ducats are slaughtered as part of an adroitly planned and executed massive assault.

So, this dangling stereotypical actioner with some global acuity has Mike and Asher on the (underground) lam from supreme mastermind Aamir (Alon Aboutboul) and son Kamran (Zuaiter). And, back in D.C. Asher's upper subordinates led by Freeman's loathing, browbeat Trumbull enact a retaliatory offensive.

The premise may be considered embellished considering the actual purported destruction and the damaged witnessed to a Westminster Abbey tower (shades of 9/11?). The dialogue reflects the reckless nature of the writing from characters created by Creighton Rothenberger and Katrin Benedikt. And, the savagery of what's on view probably stops one to reacting to the risibility.

While Eckhart (The Dark Knight, I, Frankenstein) endows Asher with a reasonable disinclination and has some decent raillery with Butler headlong into virile championing there's something about Mike that appears not to be unveiled (yet anyway). Of course, on the home from Banning has a pregnant wife (Radja Mitchell). Other underlying characters touched on arbitrarily in the narrative, and Bassett isn't given enough of a role. The major distress element and look pervade characters played by Melissa Leo, Robert Forster, and Jackie Earle Haley.

Therefore, in London a counterfeit, decayed look at distrust in an increasingly troubling world never dramatizes the poignancy of what really happened earlier in the U.K. on recently in Paris as cautionary prognostications about Muslim control in Europe from deceased heads of state may not be that far off.