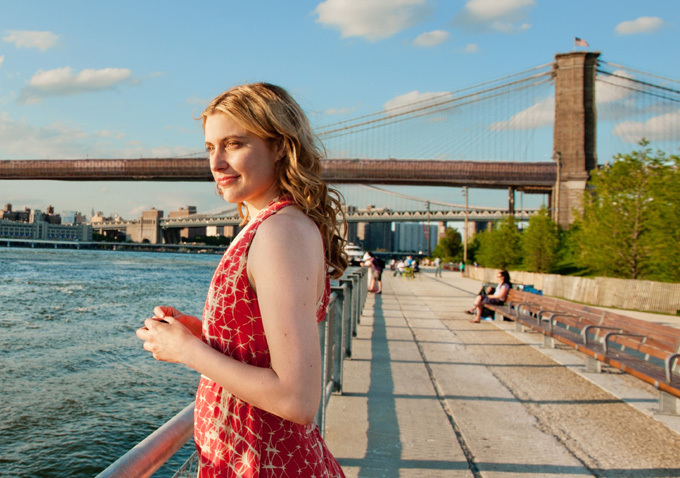 
Romantic independent dramedy about a Manhattan singleton just shy of 30 has sure fire signs of actorly growing pains - in this case Greta Gerwig in her first leading part. Yes, Lola Versus (yes it leaves out the opposition) even with a little of the Woody Allen or (Bridget Jones) vibe - has a nice feel for the downtown but doesn't always ring true through its musty, even ill-advised ways.

Gerwig's erratic eponymous character gets the message from the get-go about sweet fiance (Joel Kinnaman of TV's original series The Killing and Safe House) wanting to split with her with nary any explanation; perhaps to get to the premise of Lola picking herself up.

Under the direction of Daryl Wein (who serves as a scribe along with Zoe Lister-Jones), Lola has to endure the setback. She tries to get back on track with close friend Henry, a not so distinguishable Hamish Linklater. A rollerblader played by Ebon Moss-Bachrach offers more palpable crazed wit as a one-night-stand.

Lola isn't fashioned with the full-bodied creditability as in aforementioned characters from Susan Maguire or the iconic New York filmmaker, so she has to be downsized, and isn't helped by the familiarity of the material (even if its conceit seems original like The Five-Year Engagement). So, Gerwig isn't as interesting as she's been in recent forays like Damsels in Distress and Greenberg (and to a lesser extent the remake of Arthur). Arguably, the characters as a whole really don't elicit much viewer sympathy.

Lister-Jones (know to some for her similar part on TV's Whitney) is more of a caustic scene-stealer as Lola's closest chum Alice; their bonding scenes will resonate for certain distaff audiences. Essentially, Lola has to get to over a rotten date complicated by a sleepover to help in the process of recovery and realizing where she needs to be in her (relatively) early adulthood.

The feminine slant is a timely enough fit even by today's standards, but the all-too-common approach seen in many romantic comedies doesn't make the life of a tenuous young woman as amusing and insightful as it might have been. Hopefully, Gerwig and even Linklater will have meaty stuff within the kind of elements and trappings that will underline assurance rather than left (stuntedly) out to dry.