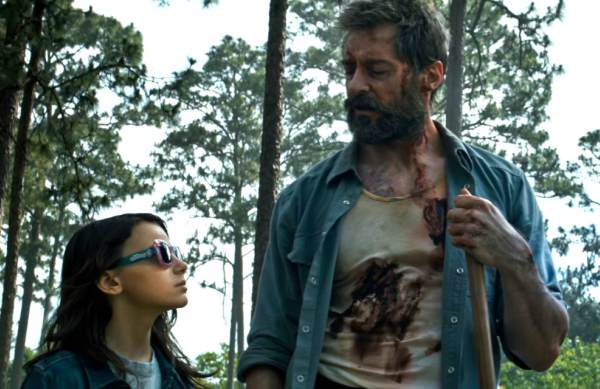 
Logan is the next and presumably last film in the Wolverine series of films.  I say it is presumably the last film because Hugh Jackman has stated that this will be his last film as the iconic character.  This time around we find Logan many years into the future where the mutant population has dwindled to the point of near extinction.  Even Logan, who has always looked youthful (thanks to his regeneration ability) looks older and much more haggard.  He is living a rather sad life, compared to his super hero days, as a rental limo driver.  He uses the money earned to take care of Charles Xavier (Patrick Stewart) who is kept hidden from the world.  However, when a woman approaches Logan about a young girl named Laura (Dafne Keen) it is discovered that she is a mutant and is being hunted by a mysterious organization.  So Logan, as well as Charles, must take the child to the Canadian border where it is said she will be safe.

First off, let me just say that this film is not your traditional super hero film and in many ways will feel much different from previous X-Men films.  For starters the movie earned a "R" rating and it uses it to its fullest.  Characters curse, and the violence is so brutal you can help but cringe at some of the ways people were killed in the film and for the most part this film is very, very dark and sad.  That is not to say this is a bad thing, in fact for the story they are telling I find it to be very important to the story.  The film is taking place in a time where our hero are beaten down and emotionally defeated and the way they act reflects this tone.  I do not believe that this film would have been as good as it is if it had diluted the film to a "PG-13" rating.

The acting in this film was superb across the board.  Hugh Jackman goes all out in his reprisal of his role as Logan and gives what felt like an Oscar-worthy performance.  Patrick Stewart also does an excellent job as the old and much weaker Charles Xavier.  You can tell both of these characters have gone through so much even though they barely discuss what happened in the past.  However, the biggest surprise came from the youngest of the leads Dafne Keen.  I was truly surprised by her performance as the mutant Laura.  For at 80 percent of the movie she doesn't say a word and yet she manages to stand toe to toe with everyone on the screen, even standing out from them.

The only thing negative I have to say about the film is that the film feels long.  There are many downtime moments and they do seem to stretch a little bit but it was never distracting and I felt myself engaged throughout.  Also, even though I believe that the tone of this film is a welcome departure from the traditional super hero film I do believe that some may find it too much.

So in the end, Logan is an excellent movie with a touching story and excellent acting and action to go with it and while some may have issue with its darker, more somber tone I do not believe that it is a bad thing at all.  And if this does turn out to be Hugh Jackman's final Wolverine film then he ended it on about the highest note that he could have.  This is a film I wholeheartedly recommend seeing.