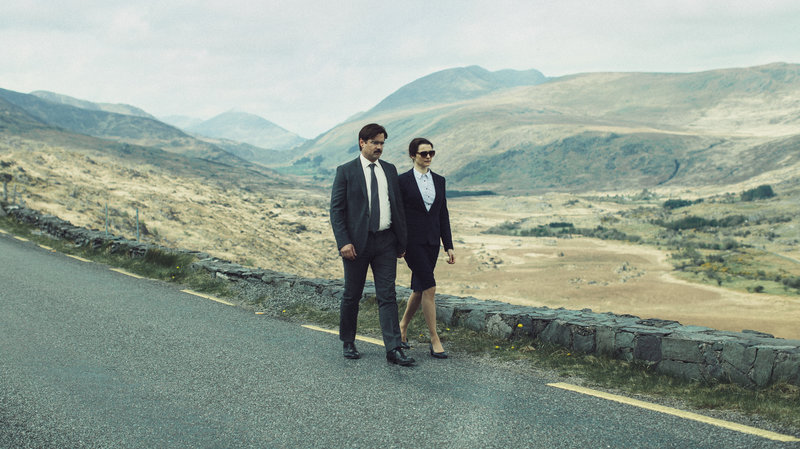 
Greek writer/director Yorgos Lanthimos conjures up a dark, dystopian absurdist fable with some whimsical flair in a comedic stab at romantic savoir-faire.

The Lobster (set in the near future or alternate reality? and shot pristinely in a rain-swept Ireland) stars a paunchy middle-aged Colin Farrell and Rachel Weisz (off-screen wife of current 007 Daniel Craig) with the former having the only proper name of David, a recently dumped architect from The City who enters The Hotel for some relational rectification.

Co-scenarist Lanthimos has an oddly, anthropomorphically interesting scenario for the newly single (covering the loner, divorced, and widowed) which carries punitive ramifications if the edicts enforced the tough-minded hotel manager (a wonderfully inscrutable Olivia Colman) aren't met. Including being hunted (early on a donkey is tracked down by someone and changed into animal of choice if not paired up within a month and a half. David's is the titular crustacean because of its long lifespan and being an aquatic aficionado (as well as sports in that habitat). Sexual orientation is given a fair shake at least if you're not bisexual (a no-no) like half-sizes of shoes.

Things with a 'heartless' woman (Angeliki Papoulia) go awry as he befriends a limping man (Ben Whishaw) and a lisping, desperate man (John C. Reilly) before falling under the auspices of a forest-based rebel faction Lone Leader (France's Lea Seydoux of a beguiling Blue Is The Warmest Color and an upcoming Bond girl). Celibacy is hard to practice there too when David meets unnamed Short-sighted Woman (the still lovely Weisz) with a fondness for rabbit which puts them in harm's way.

It's not that The Lobster doesn't brim with a distinctiveness that the filmmaking espouses in the wake of current views about marriage and technology of dating (on phone apps, e.g.) and can't be scathingly wry from a deadpan style that Farrell sensitively embodies. Which makes for some watchable interludes with his co-stars, including Weisz even if their scenes together may not really generate the desired peculiar potency.

The substance in the latter reels begin to trail off so as to make the action in The Woods finally dastardly but with little to support what travails had led the characters (particularly David) up to that point. The results just crack (no pun intended) while in the woodsy setting to leave the director's English-language debut more off-putting than delightfully eerie and disarming.

Still, the enterprise isn't a vapid misfire by any stretch (with characters like Nosebleed and Biscuit Woman) and for percipient audiences Farrell's best low-budget effort since the likes ofSeven Psychopaths and In Bruges. But, in this sublime 'grave new world' the presumptive effect is too cold and inconsequential like the remake of Total Recall (2012).