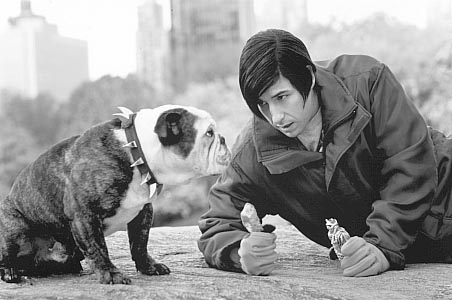 Adam Sandler's Little Nicky is Casper the Friendly Ghost from hell.  Nicky, the friendly little devil who won't hurt anyone, is sent on a mission to Earth designed to return his evil brothers in a flask, and save Dad, the devil (Harvey Keitel), from literally falling apart.

The evil brothers (Rhys Ifans and Tommy Lister, Jr.) are not willing to wait ten thousand more years to take over; they leave hell for Earth freezing a wall of fire at the gates of hell, which prohibits souls from entering and will cause Dad to destruct.

Parts are played by Rodney Dangerfield as the grandfather, Lucifer; Reese Witherspoon as the angel mom; John Lovitz the Peeper who starts it all; and Ozzy Osbourne who does what he does best on stage to save Little Nicky from the evil brothers.

While Nicky learns to eat Popeye's Chicken, his side kick, bull dog Beefy, attempts to guide him on Earth.  Nicky is constantly killed and returned to hell only to be sent back into the NYC subway opening back to Earth.  Patricia Arquette, out of her usual style, is a shy Valerie with glasses who befriends the little devil who is called shovel head after his brother hit him in the head with a shovel.

Sandler plays the entire script with a twisted mouth, snarled speech and a bent over posture.  Initially that gives us laughs but wears thin after the first half hour.  The heavy metal guys (Peter Dante and Jonathan Loughran) who bake a reefer spice devils food cake and Quentin Tarantino as the street Deacon preaching the end of existence zest up the fable.

Steven Brill the director who is famous for writing, The Mighty Ducks trilogy has interesting characters to work with but relies too heavily on repetition and the semi mute Nicky.  Sandler can make us chuckle and at the same time feel compassion for his characters, but under Brill's direction this character is static and unemotional.