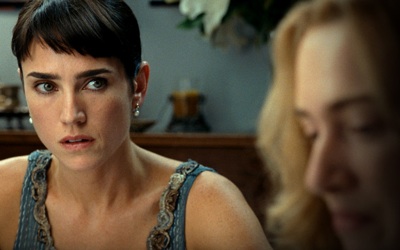 
The playground of middle-class suburbia is truculently served up by Todd Field, whose first feature was the acclaimed In the Bedroom.

Now, he works quite effectively with scenarist Tom Perrotta from his 1974 novel to center on a group of parents who seem to lead well-groomed lives in meeting around their close-knit community.

A wannabe attorney, housedad Todd (Patrick Wilson) is carefully analyzed by some gossipy moms. One of them, Sarah, played by Kate Winslet, is successful in connecting with this guy, dubbed the "Prom King." A kiss will lead to a lustful relationship.

Todd's married to an alpha-female, an underutilized Jennifer Connelly (Dark Water), and Sarah isn't very happy with her flat executive hubby (Gregg Edelman) who dabbles in on-line pornography. Those who are familiar with "Madame Bovary" may begin to see where Sarah's needs may end up.

Looking closer into what simmers beneath many well-manicured lawns, Field's delicate dissection includes a child molester, a potent Jackie Earle Haley, just out of jail, now living in their neighborhood. His life is made difficult by Todd's friend, Larry (Noah Emmerich of Frequency), an overzealous bully who isn't without his own skeletons.

LITTLE CHILDREN is willing to go at a slow pace to let the audience better understand the foibles and emotions of some smartly drawn out scenes. There is a deceptive passion at work here with thematic resemblance to the darkly entertaining American Beauty. Field exhibits much fair-mindedness when it comes to his characters, especially when high anxiety arises around community action. And, the production, especially the elegant lensing, belies his growth as a filmmaker allowing Winslet to provide much depth from Sarah's infidelity, making those in contact with her shine, especially Wilson.