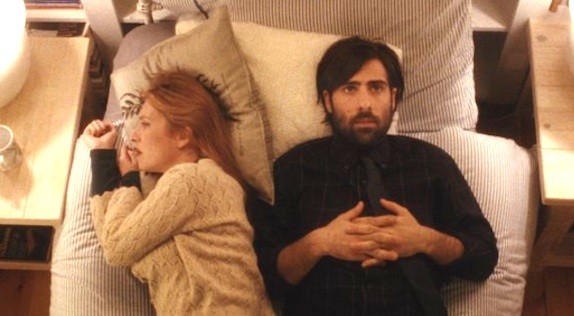 
This independent, intellectually literate comedy may be excoriated for its characters but it's hardly meretricious as writer-director Alex Ross Perry has a supercilious, tetchy voice in Jason Schwartzman (Saving Mr. Banks, Grand Budapest Hotel) as the eponymous protagonist.

The filming style in Listen Up Philip (with its egotist conflict and erudite atmosphere) may harken many back to the days of Shampoo and when Woody Allen really got rolling as a writer/director as the camerawork officiated by director/writer Alex Ross Perry (The Color Wheel which established him as a director to watch and which he starred in).

The boastful, if professionally applauded Philip isn't doing press for his latest work as the rising young novelist in the Roth ilk becomes enamored with a much older writer (also like Roth) and well-played by Jonathan Pryce whose huge selfdom and frosty demeanor augments the unfavorable side of his younger
counterpart.

You never really get a deeper feel for authorial pretentiousness and presentation, but around the privilege and personal conceit something begins to connect that can at least elicit admiration from (and stimulate) a more discerning audience even at alternative art-houses. A nice touch is a matter-of-fact, all-knowing narrator (Eric Bogosian) which complements the text and portraits. Listen Up Philip is also available like many in its vein via Amazon, Netflix or VOD to reach out in its compulsive way as a thoughtful throwback, bolstered mainly by Perry's aplomb behind the camera. But, besides a sharp Schwartzman and arguably better Pryce, Krysten Ritter makes an impression as Pryce's daughter and Elisabeth Moss (The One I Love) a better one as Philip's neglected photographer girlfriend (among many alluring distaff prospects).