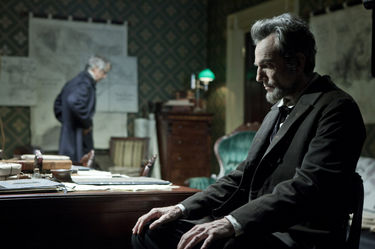 
The new sweeping overlong drama from Steven Spielberg (War Horse) has some notable prudent political chutzpah about it even if it doesn't always resonate with enough airy poignant efficiency.

So, the film (based on Doris Kearns Goodwin's novel subtitled The Political Genius of Abraham Lincoln) adroitly manages to cut through the swath of subtext into lawmaking machinations often in the stuffy quarters of Congress and the White House during the final four months of the 16th U.S. President's life.

The result (filmed mostly in Virginia) emphasized in essayist, playwright (Pulitzer-Prize winning) Tony Kushner's voluble screenplay is Lincoln's flexibility to achieve an all-important end (which still continued in the 20th Century). To this end, Day-Lewis really isn't at the forefront of what is a overriding focus on reticient, temperate equanimity.

His Secretary of State William Seward (David Strathairn) retains the kind of ardent lobbyists (James Spader, John Hawkes, and Tim Blake Nelson) who can muster support for the abolitionist cause. Their amusing means is complemented by the scene-stealing Jones as anti-slavery lawmaker Thaddeus Stevens on the floor of the House of Representatives having at it with Lee Pace's pro-slavery Democrat Fernando Wood. You don't get the same rhetoric or hoopla these days as often covered by C-SPAN. And, there's Jackie Earle Haley as the impish, restless Alexander Stephens, the Confederate States of America's Vice President.

Just to the south of the wheeling and dealing and heated exchanges are the battlefields of an ongoing Civil War itself as Gen. Ulysses S. Grant (Jared Harris of the hit small-screen series Mad Men) begins to map out a peaceful resolution with the Confederacy. And, the domestic situation in this textured, if fairly stolid tale isn't neglected through the stress when it comes to Lincoln's wife Mary (Molly) Todd (Field) and oldest son Robert (a busy Gordon-Levitt). Field stands out in good and bad ways with her transcendent emoting apparently necessary for a part (where she doesn't seem deterred by her advancing age), and Levitt, this time, doesn't have enough of a role to sate his actorly pride and aplomb (as demonstrated this year in The Dark Knight Rises and Looper). The importance of his casting may have been undone a bit by Kushner in trying to refine the bulky text into a more, arguably coherent whole (with perhaps too many constitutional speeches).

Nevertheless, the chance is there for audiences especially to enjoy actors who just don't make as many films these days like Spader and Hal Holbrook (who played Lincoln in a 1974 TV mini-series as well as in North and South) as Francis Preston Blair, among many other thespians providing mostly subdued turns. Included are S. Epatha Merkerson and Gloria Reuben (as a family employee with some important questions for a fascinating Chief Executive whose silhouette is reminiscient of the winds of change).

Having Day-Lewis (whose vicious Gangs of New York character William "The Butcher" Cutting opposed Lincoln politically) on the marquee with the Spielberg name should invite more than enough curiosity though many may question the way it educates in sticking close to the record (at least in reverence to Goodwin's source material). But, the two-time Oscar winner embodies the omnipotence of a greatly admired man with a gentle command even the script isn't willing to let him really internalize an extraordinary, yet troubled man. Yet, the depth of dignity and gravitas allows for a charisma and thoughtful humanity arguably second to none. One that should be ingratiated with much consideration for the upcoming awards season.

This very polished production (with much put into the facial hair, make-up and timely wardrobes), elegant lensing by Janusz Kaminski (with some ethereal backlight designing) and the softness of John Williams' compositions might be too somnolently soothing for some. And yet, what doesn't pass over the fateful outcome of one determined to outlaw slavery and a raging Civil War, a witty if flawed Lincoln is a contender in its convictions about dirty politics. Too bad it couldn't have overcomed the lurching, divisive aspects that may have presented a limited biopic into a more vital, illuminating whole.