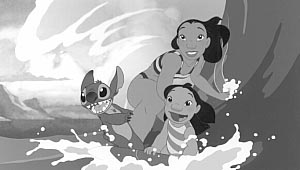 At first glance (from the previews) Stitch gives the impression he is another Pokemon.  Parents can relax - they won't be forced to sleep through this bright, well written smart animated feature.

Little Stitch is the product of experiment 626, a result of genetic experimentation in the Galactic Federation.  The rulers of the planet in disciplining his creator determine that Stitch must be isolated to protect the citizens.  Stitch is a nasty little devil who gets into everything using great strength and cunning.  Being held in security is not for the little blue experiment; he escapes in a bright red police cruiser and heads for Earth, a planet protected from destruction because it has been designated a preserve for mosquitoes.  Stitch's inventor Jumba Jookiba and one eyed Pleakley are assigned to get him back.

On Earth, Lilo is an orphan loner, not a perfect Disney character.  She is a handful for her older sister, Nani, to manage.  Lilo is short, dark and constantly gets into trouble since losing her parents.  Her social worker, Mr. Bubbles (Vic Rhames) who looks like a linebacker, is close to taking her away from her sister.  Lilo & Stitch are misfits.

Lilo periodically plays at voodoo and is nasty with her schoolmates.  When Lilo & Stitch get together the two odd characters get along fine, as Stitch looks like Elvis playing "Heartbreak Hotel,"  picks his nose, plays records with his nail as the sound comes through his mouth and changes his appearance at will.  Lilo adapts to and enjoys each of the changes.

As the story develops one eye Pleakley learns mosquitoes are not warm friendly creatures, Dave,  Nani's boyfriend, teaches the two mavericks to surf, Mr. Bubbles becomes a friend, Stitch begins to look warm and cuddly and they all learn no one is left behind in a family.  This unusual family is defined in a snap shot that changes as Lilo & Stitch evolve.

The bright and fast pace script will demand the attention of kids as adults reach to catch the double meaning dialogue.  Lilo & Stitch is a pleasant message wrapped in frolic.