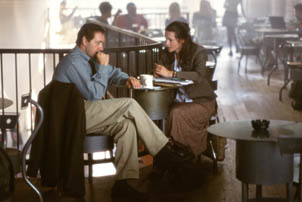 The Life of David Gale

Director Alan Parker begins with a running reporter Bitsey (Kate Winslet) as he leads us into the world of David Gale (Kevin Spacey), an anti-capital punishment professor who has been convicted of rape and murder.  Alfred Hitchcock's 1958 The Wrong Man a film in which Henry Fonda is accused of robbery and convicted when identified by clerks, immediately comes to mind.

Convicted David Gale has asked to meet with Bitsey just three days before his scheduled execution.  He is willing to be interviewed by her and no one else.  He has evidence that she protects her sources as she just came out of the lockup for not reveling a source on another story. Bitsey Bloom flies from New York to the Lone Star State along with her intern Zack (Gabriel Mann).

At first glance this appears to be another Dead Man Walking with a reporter replacing the nun siding with Gale and taking action to save his life rather than saving his soul.  But this interesting  script is never predictable as it keeps us on the edge of our seat straining for more information which comes from Gale's narrative to Bitsey.

Between the flashbacks telling the story, we see and feel the harsh climate in the maximum security prison as blaring speakers tell the reporter and prisoner to "sit down."  The bureaucrat Bitsey must deal with following the rules to the letter - Gale does everything irritatingly perfect.

Gale first discloses the framework of his first rape charge brought against him by a student, Berlin (Rhona Mitra), who made it clear that she would do anything for him when she finds herself near expulsion and needs better grades.  He tells her to study but she gets to him at a campus party.  Gale also discloses he has debated the Governor of Texas and as the debate is exposed he catches the limited governor mixing quotes from Hitler and the Governor's own speeches.

To that point it appears we are observing a film which tilts far to the left on the capital punishment, which it does, but there are other elements which steer the script and bring us into a powerful realm of film making which confuses and demands our attention.

Laura Linney's Constance Harraway who also strenuously opposed the death penalty and presents herself with little glamor is suddenly found raped and murdered.  All the evidence points to Gale.  We also learn that David Gale is not without limitations and flaws and acts immaturely at times.

As the elements pile up reporter Bitsey sees the pickup truck following her and the ten gallon hat driver is one who worked closely with Harraway.  Gale's lawyer is flawed and would not step aside when seasoned attorney's offered to work pro-bono.  A video tape shows up depicting the murder scene.  The plastic bag and gloves also draw us further into the mystery of what happened the night of the murder.

Director Parker brings an unrelenting, exciting, heart stopping plot rather than attempting to take a side on the matter of using death as a tool to stop crime.  Kevin Spacey, Laura Linney and Kate Winslet are brilliant players in a fiction that won't let go even when music from Puccini's Turandot fills the soundtrack and we learn of a million dollar pay off.