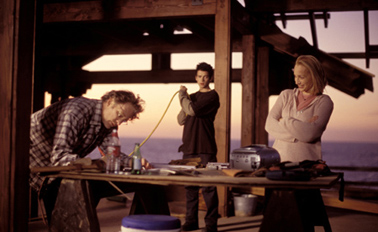 Life as a House

The ads for Life as a House confidently endow nobility into reconstruction of one's life through a man's castle, or dream house.  And the metaphor of life though making something meaningful somehow lifts a predictable family melodrama, primarily through Kevin Kline's sincerity and panoramic shots from a California coastline.

Thus, to a degree, it's Kevin Kline's ability to turn much more than a mid-life crisis for his fairly curious George into a pro-active challenge for himself and unloving, estranged son Sam (Hayden Christensen) that provides compensation for Irwin Winkler's sentimental strapping movie.

Mark Andrus' overly humanistic script has elements of Stepmom and the acclaimed dark suburban comedy American Beauty with two of its supporting actors here as Sam Robards and Scott Bakula play a hounded, annoying neighbor and a local officer.

But it's the way in which George needs to make things right after learning he has only four months to live that puts Life as a House on an emotional path to redemption.  In the process, there's comedy and pathos in those around the divorced George who oddly enjoys a comfy shack on a cul-de-sac in a wealthy neighborhood as his lifestyle and stubbled face don't seem to match an architect with 20 years of service.

Life as a House starts with George being watched by middle-aged single neighbor Coleen (Mary Steenburgen) and daughter Alyssa (Jena Malone of Stepmom) as the 45 year old stands over the cliff with the Pacific as his urinal.

Winkler and Andrus then introduce Kristin Scott-Thomas' Robin, George's ex-wife and her cute kids by Jamey Sheridan's unemotional breadwinner, Peter who has given the family, including his distant stepson, a nice place to live.  After Sam is seen hanging in high school with bad influence Josh (Ian Somerhalder), who is friendly with Alyssa, things are worse at work for George than at home with irate neighbors like Robard's David whose yard is soiled by the architect's dog.

The architect is actually a model maker who hasn't embraced technology with the new CAD design system and his experience soon means nothing to his superiors who know he loves his job.  Yet, it's an end to something he says he hates.

Kline's portrayal isn't as detailed as in Ang Lee's more poignant look into family relationships, The Ice Storm, but his pride in the name of love merits more praise than the film can pay off, given its unoriginal building blocks.  But it results in some telling scenes with Thomas as she is caught between a rekindled passion and stability.

Life as a House isn't as good as it gets for adult audiences looking for a reaffirming tear-jerker, but there is a vision that christens a new opportunity for redemption and rebirth.