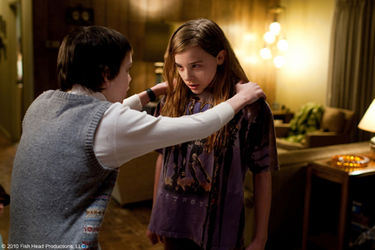 
Writer - director Matt Reeves' ("Cloverfield") topnotch vampire thriller is a remake of Sweden's cult favorite, "Let The Right One In".

Set in New Mexico during the 1980's, its about Owen (Kodi Smit-McPhee), a 12 year old boy, and Abby (Chloe Grace Moretz), a girl vampire who moves in next door.  She lives with her "uncle" (Richard Jenkins), who kills to provide blood for his ward.

They meet at night in their apartment block's courtyard where Owen, a bullied, lonely kid plays by himself.  When he first sees Abby, she's barefoot even though its the dead of winter, her hair is uncombed and Owen thinks she smells badly.  Even so, both are in desperate need of a friend, so the unlikely pair form a bond.

Abby tells her new friend that she's also 12 "give or take", and encourages him to stand up to his schoolmates who have beaten  and threatened him.  He teaches her Morse Code so they can communicate on the shared
wall between their apartments.

But this is not just a light little movie about two kids getting to know each other.  The killings that take place of course at night, are vicious and quite frightening.  Especially an attack on a teen who is a passenger in a car parked at a gas station.  While the driver is out of the car talking to friends just feet away,  his friend violently fights for his life.  The camera is aiming into the car from the rear window, and it gives the scene an eerily close feel to it.

Both actors are terrific in their roles. Smit-McPhee is heartbreaking as the abused, slight boy, and Moretz does the impossible, by making her character sympathetic.