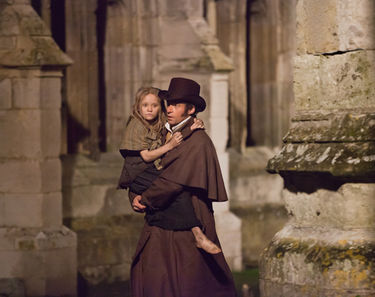 
An intensely told musical version of Victor Hugo's famous 1862 tale of destitution and redemption sweeps the silver screen by way of Tom Hooper who last graced cineastes with The King's Speech which won the big Oscars a couple of years ago. Unlike Bille August's 1998 version starring Liam Neeson and Geoffrey Rush, a sprawling turbulence is intimately driven with its devoted roster singing the dialogue live (with an orchestra probably off in the pastoral distance).

Les Miserables is an ambitious technical feat that can prove as jarring as exhilarating in depicting early 19th Century France from a sun-bathed cinemascope to a rather closed-up cloudiness. It almost seems one medium (having been seen since 1980) is trying to make its way onto another. For it to have considerable impact it really does help to be familiar with the source material.

The storyline contributed in part by the musical scribes in Alain Boublil and Claude-Michel Schonberg has its temporal leaps as a heavy operatic mood is established with enormous emotions empowered in the early going.

Later, Javert continues to press after Valjean when the latter and a more womanly Cosette (Amanda Seyfried of Mamma Mia) have settled in Paris. There a young revolutionary Marius (Eddie Redmayne) has become smitten with her, while the Thernardiers' daughter (Samantha Barks) has turned her affections towards Marius.

The dramatic conflict is in place with many ballads staged to show-stopping effect with memorable ones from Barks, "On My Own," as well as "What Have I Done?" from a compelling Jackman (also fine as the lively Bunny in the animated Rise of the Guardians). Hathaway's rendition of "I Dreamed A Dream" amazingly delivers Fantine's grief-stricken pain, while Redmayne's vocal and acting skills have an unexpected cogency.

Hooper obviously had a handful to make the stylistically diverse shoot a full-on bravura showcase with multitudes on location, crammed sets in the streets and effects to wage a winning cinematic uprising. Even if Crowe isn't as stellar in song crescendo as Jackson they make the Valjean/Javert dynamic realistic and heartfelt. The filmmaking finally makes its points through art, politics and most prominently, song. It may take its emotiveness to a monster-energy drink level at times but the widening gap between the elite and oppressed with its street protests is even relevant in a world trying to deal with its own fiscal cliff. A struggle between cold-hearted and liberal-mindedness is overwhelming but vividly rendered by a well-chosen cast, especially an ever-committed Jackman and Hathaway.