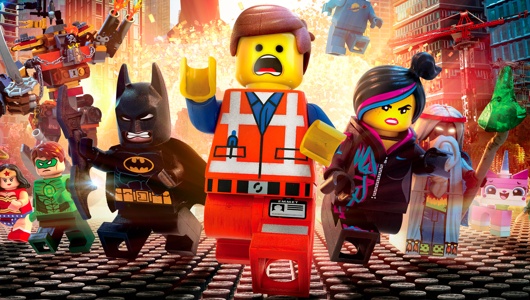 
Working outside of the box from stability and security felt from the winsome feel of  famous Danish-made interlocking bricks has an irreverent ebullience from the makers of Cloudy With A Chance of Meatballs and a comic reboot of the teen police series 21 Jump Street.

Ex-sitcom scenarists Phil Lord and Christopher Miller direct and co-write the colorfully animated The Lego Movie which has a wonderful lived-in stop-motion production feel about it in spite of its way with clicking commerce and art together like joining plastic bricks as creatively as today's 3D computer animation allows.

A pristine world of Legos is on view to behold as the filmmakers work in a capricious, witty, self-effacing strokes to make these bricks stick with nostalgia, even innovation, the former more notably in a sweetly rendered segment in the latter-going. Without ever really taking itself very seriously.

The detail and continuous snippets of humor which never is smeared with product placement like some of the separate figures and bricks knows how to engage those (especially the wide-eyed seven-year-old) who find a dilemma when joyfully coming upon an unopened eponymous set.

So, a family espresso-laden adventure yarn with ties to The Matrix and Star Wars makes the shifting milieu of Bricksburg builder Emmet (voiced by Chris Pratt of Moneyball, The Delivery Man and Her) into a classic journey. His conformity makes him blend into an Everyman who enjoys the same tune "Everything Is Awesome" everyone else does.

Will Ferrell's Lord Business (maybe akin to his Megamind maniacal esprit) wants to keep his Bricksburg domain by the book when it comes to those and the infrastructure and automotive produced by them. But there are others like Master Builders who see different, more unique patterns than the Orwellian controlling manual-minded Business.

Emmet's routine at his construction site is disrupted by a Trinity-like Wyldstyle (Elizabeth Banks of The Hunger Games: Catching Fire) with streaks in her hair who whisks him away from a dual-personality minion Bad Cop/Good Cop (Liam Neeson). You see, from the prophecy of the sage-like Vitruvius (Morgan Freeman) the hooded, punk-rock gal moves the reluctant, unbeknownst messiah (The Chosen) into new realms to help undo the dastardly global orderly gelid machinations of the egotistic Business. It helps that she has a celebrity for a beau in Batman, voiced by Will Arnett. Accompanying our freedom-fighters are disparate, amusing types - a 1980s spaceman Benny (Charlie Day), Unkitty (Alison Brie) and pirate/cyborg Metal Beard (Nick Offerman).

It would unfair to divulge how Business' scheme comes to be as THE LEGO MOVIE has a taut, logic innocence that builds into the range of the elaborate kits with favorite set-pieces like outer space and the Wild West out there and many other nuanced sequences to appreciate. Even from the stables of D.C. comic superheroes out to contentious literary stalwarts like Gandalf and Dumbledore. Another moment even features the voices of Billy Dee Williams and Anthony Daniels though there's no detection of Harrison Ford.

When a daughter or son's plastic bricks can make one flash back to childhood while having enough zaniness for those of an impressionable age, Lord and Miller know how to effortlessly exceed ambition while being unexpectedly thoughtful around scuffed-up old-fashioned convention. Just like Bricksburg, a bustling verve prevails with droll, surreal means in an animated pleasure affectionately pieced brick by brick.