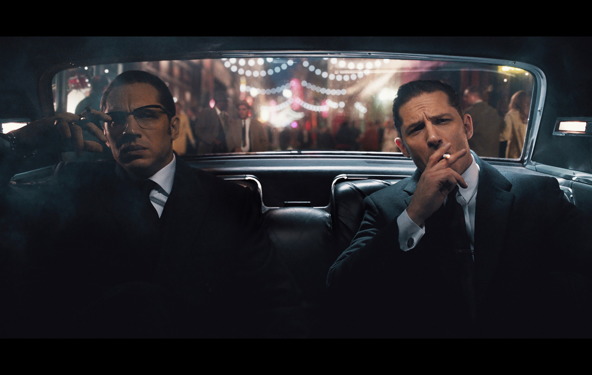 
Brian Helgeland (writer of L.A. Confidential and Mystic River) and director of (A Knight's Tale and 42) helps accentuate an edgy, if amusing menace to an anomalous, maybe too unintelligibly sounding limited biopic previously covered on screen a generation ago. It could make for an interesting comparison to the recent Boston-set Johnny Depp-starrer Black Mass which was easier on the ear (for U.S. viewers), just as grim and arguably more coherent.

A watchable, if suspect Legend stars Tom Hardy (who also excelled with a scene-stealing Charlize Theron earlier this year in Mad Max: Fury Road and has his same skilled stunt double Jacob Tomuri distinguishing himself against a maltese gang) in dual roles as twins Reggie and Ronnie Kray - terrorizing sibling bosses who had much control over London's criminal underbelly in the swinging early 1960s. The set pieces aren't really that elaborate, whether on a street, in a tavern or a nightclub.

The less 'wild' Reggie can turn bonkers on a moment's notice even if more of an even-keel bloke and less outspoken. How he gets his much junior woman (Emily Browning who offers much off-screen voice-over to help patch plotting issues) to become his wife may easily begin to sway empathy towards his bespectacled, slightly more stout brother.

The outwardly homosexual (punishable at the time in the Queen's domain) Ronnie happens to be the more intriguing of the two (having spent two go-rounds in criminally-insane institutions). And wise enough to ensure Scotland Yard will be distanced from their operations when a parliament official is caught carousing in deviant conduct in his flat.

Among synonymous mobsters more easy to identify is Chazz Palminteri (remember Bullets Over Broadway?) as Meyer Lansky's consul, as well as David Thelwis (The Theory of Everything) as the Kray adjudicator. Stymied law enforcement finally able to lift the veil on a dreadful dominion is tempered reasonably well by Christopher Eccelston (Thor: The Dark World). Tara Fitzgerald appears as a bossy matriarchal figure while the Kray familial side is a little hazy, as well as how both really carried on behind closed doors.

Some may liken elements of the nutty happenings to the oeuvre of Guy Ritchie - Snatch or Lock, Stock and Two Smoking Barrels, for example, though ensconced in a less full-bodied peripherally audacious aroma. Yet, as a period film the production excels often from the polished threads provided by costume designer Caroline Harris. And, the technical wizardry used to tell such imposing ruffians like Reggie and Ronnie apart in Hardy's Cockney conquest.