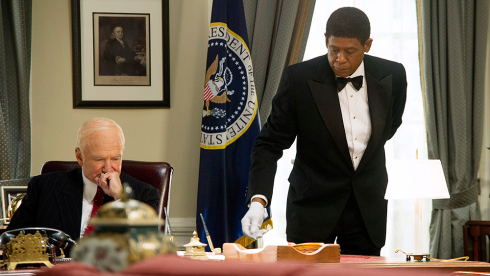 
Forest Whitaker will be on the best actor list when the awards season begins next January.  His work in The Butler is a study of a man who always keeps his control as he works through life as a son and a father.  This will be an Essential on Turner Classic Movies in time.

Director Lee Daniels, it's his name that appears before The Butler carries us through Cecil Gains (Whitaker) life from his work in the cotton fields of the south where he observes his mother raped and turned mentally blank as his father is shot for objecting. His life ranges from that dark powerless world to a life spent at the White House dealing with the most powerful people in the World.

The references to the presidents he served, from Eisenhower to Reagan are incidental to the turmoil on the Earth and in the country and Gains challenging relationship with his sons.  But the story is of a man who lives through a long journey filled with pain, love and great dignity.  Daniels displays that dignity through expressions rather than words or actions from Whitaker. He is beautifully restrained when necessary but always revealing of the emotions he must subdue.

The paradox of Gains early life, the civil rights movement, Vietnam, all play out on two distinct stages.  His personal life and what is happening to his nationality are in complete contrast to the opulent world he lives in each day at the most powerful address in the World.  The strength of the film lies in the different view of the world from Gains and his son. It appears that Gains never climbs away from seeing his father shot in the head by a white raciest, he is always cautious and in that he is safe in a descent home and a dignified job.  His son (David Banner) is not willing to settle for that he is determined to force change in America and the two divide because of their strong feelings.  That is the center of the film and the Presidents play only an interesting sidelight.

When Nancy Reagan invites him and his wife to a state dinner he is clearly uncomfortable being served by the staff he works with each day.  It is a place that in his mind, he doesn't belong in.  His wife (Oprah Winfrey) on the other hand loves reaching to a high level of society.  Oprah doesn't add much to the film, she is almost furniture and lives like many wives in her time with little but her husbands success to cling to.

He maintains his neutral political position, listening to Eisenhower deciding what to do in Little Rock, sharing sympathy with Mrs Kennedy, admires what Johnson gets done but perceives him with out class, shares a dark evening with Nixon, sees Reagan as searching for the right direction on civil rights, but mostly he is impressed that in his lifetime the head of staff at the white house is a black man and that his last visit down the hallways he knows so well, a man of color is President.  That is symbolic of his journey from the cotton fields to the oval office and as an old man, his life and lifetime are complete.