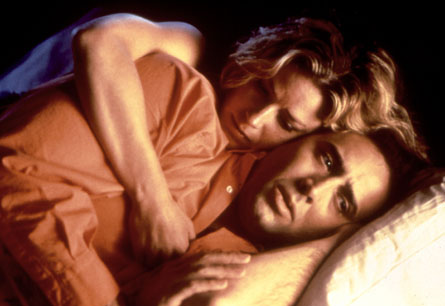 
I think I'd better preface my review of Leaving Las Vegas by saying that I fled the theatre before the film's conclusion. This action is what I now refer to as 'Leaving' Leaving Las Vegas.

Why did I leave? I walked out when a rape scene and its aftermath became unbearable disturbing to me. I became so uncomfortable that I starting questioning what could possible be motivating me to sit through another moment of the poor woman's torment. From what I have been told, the film's conclusion, the five percent of the film that I missed, saw the two main characters deteriorate further until all hope for salvation was exhausted.

At the risk of sounding like someone from the other side of the generational gap, it's hard for me to see the value in chronicling the downward spiral of a drunk (Nicholas Cage) and a prostitute (Elizabeth Shue). I kept hoping that the two would be buoyed and strengthened by their love for one another. When the two-first meet their feelings for each other surprised and delighted each of them - offering them each a much needed glimpse of how wonderful life could be. And, you really rally for them and want them to transcend their limitations. But they are never able to change.

Early in the film I was so impressed with its quality. It is stylishly shot and features a wonderful soundtrack with jazzy contributions from Sting. But the rape scene went too far afield. With it, my description of the film deteriorated from "an interesting and powerful commentary on the transformative potential of love" to "a sad, disturbing tale of self-destruction and loss." So, I am left not knowing how to grade the film. While its quality is superb, its content is down in the depth. I'll leave it to you to be the judge.