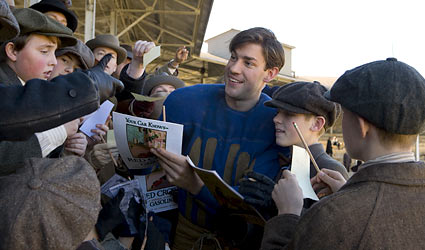 The settings, art direction and the atmosphere of the mid twenties of the twentieth century are gorgeous to see and the feeling of that era comes across accurately on the screen, just the clothing styles combined with the musical sound track alone make the film worth a look.

The script however falls short and the competition between the old pro (Clooney) and the new young strong competitor (Krasinski) on the field and off is not creative enough to hold our interest. Zellweger's Lexie Littleton hot first woman sports reporter has interesting facial expressions but her role is very predictable.

The contrast between the hard drinking up all night old timers and the changing of the non-rules game to a controlled league with a hard nose commissioner, play out but without thoughtful or field excitement.

The final big game is as dull as the score and the trick play at the end is telegraphed far to openly to be a surprise.

Clooney and Zellweger are effective interesting performers, but this is not their best effort.