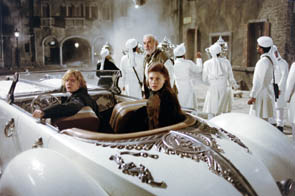 The League of Extraordinary Gentlemen

As the 19th century ends a phantom appears with the power, skill and knowledge to propel weapon development fifty years ahead of time and throw the world in chaos.  Based on books by Alan Moore and Kevin O'Neill filled with characters from literature director Stephen Norrington brings us into a world which is back in time and forward in technology.

Only at the turn of the 20th century could this fiction exist.  The feel is like a thirties serial the kind in which a hero thwarted a great menace to the world.  The customs and industrial age mechanical devices remind us of Phantom Empire (1935) in which Gene Autry fought the technocratic warriors that looked very much like the Phantom's henchmen in The League of Extraordinary Gentlemen.

Opening in London with an attack that secures gold and schematics for the bad guys and forces the British government to recruit Kenya resident Allan Quatermain (Sean Connery) to lead semi-super heroes to determine what is about to happen to the World and stop the Phantom.  The team recruited is made up of Quatermain, Captain Nemo (Naseeruddin Shah), Mina Harker (Peta Wilson), a Dracula student, Rodney Skinner (Tony Curran) who knows the secret of "The Invisible Man," Dorian Gray (Stuart Townsend) whose picture gives him eternal life, Tom Sawyer (Shane West) and Jekyll/Hyde (Jason Flemyng).  Each member of the team has strengths and weaknesses as they approach the battles.

It may be tongue-in-cheek but Connery's Quatermain receives orders from M played by Richard Roxburgh.  Their special weapons consists of a white four door convertible with enormous horsepower for the time and the nautilus a stunning thin, streamline, silver powerhouse which travels at incredible speed.  Nemo calls it the sword of the ocean.

The genius of this production places the many special effects in a position to support and subsidize the action of the characters as each displays their special ability under Venice and in the ice bound secret palace of the villain.

With the exception of Mr. Hyde who becomes way overblown the characters fit and become believable in this forget reality film.  If Gene Autry had the special effects ability in the thirties kids would never have exited the movie houses.  But The League does capture the feeling of an extraordinary world where villains toil at grabbing power and the great mechanical devices work eventually in favor of the good guys.

A terrific campy summer film, it feels as though we are back in the Saturday matinee watching the cliff hangers and knowing full well that Sean Connery won't allow the Phantom (who we learn is a well known villain from English literature) to take over the world.

Have fun in the past.