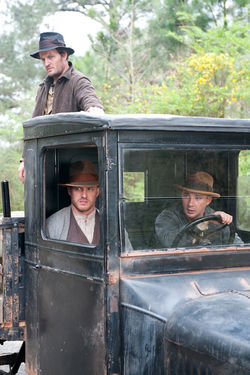 
A 2008 Matt Bondurant novel (based on actual events) is adapted to the screen by writer Nick Cave (Bad Seeds vocalist who contributes to some of the bluegrass/gospel score with Warren Ellis) and Australian director John Hillcoat who worked more persuasively together in The Proposition in which Guy Pearce starred as an outlaw.

Here, in a somewhat cogent and fulminating Lawless, Pearce appears in another account in a time when there was enough brutality and doubt - The Depression, specifically 1931 Franklin County, Va. The premise of a tale concerns a bootlegging gang threatened by authorities who want their share of the profit; Pearce (also solid in indies like Animal Kingdom) brings his brand of sadistic fermenting into new enforcing head Charlie Rakes.

It affects the complaisant relationship with the Bondurant brothers, Jack (Shia LaBeouf), Howard (Jason Clarke) and Forrest (Tom Hardy of The Dark Knight Rises and Warrior), and their moonshine business in the Blue Ridge area. A strong-willed Hillcoat works diligently on his artistic and existential ambitions through lenser Benoit Delhomme with a vibrant vapor for the topography.

There isn't quite the dramatic pull here as in The Proposition in shoring up gangster and western genre trappings; LaBeouf has some of the impetuousness of his Wall Street: Money Never Sleeps go-getter as the less experienced Jack who evinces an occasionally frumpy charm. While Clarke easily espouses Howard's tendency toward imbibing, Hardy captures a virile charismatically steadfast stoicism that works particularly well opposite Pearce.

Moving over a decade, Lawless unfolds at a decent clip even if the narrative is rather shapeless as Gary Oldman briefly figures in some of the unexpected bloodthirsty hyper violence (with a tommy gun) and Mia Wasikowska (Albert Nobbs, Jane Eyre) and Jessica Chastain (The Debt, Take Shelter) offering diverting distaff presence as the girlfriends of Jack and Forrest, a bonneted Mennonite Bertha and relocating burlesque performer Maggie, respectively.

Though the advertising indicates the presence of Hardy whose performance epitomizes cool, it's LaBeouf who has to do more of the heavy lifting as Jack (Matt's granddad) keeps the story moving through narration. Like The Road, Hillcoat has more mainstream casting imprinted here in what seems destined for the art house end of cineplexes. There's no denying an evocative visual splendor, but as a truly insightfully gritty and prickly proficient Prohibition-era picture it falls short.