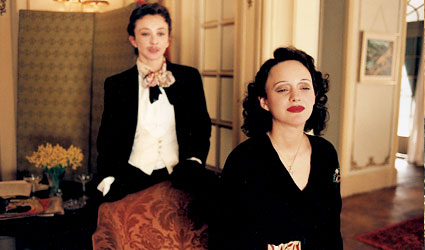 
Marion Cotillard (A Good Year, Big Fish) literally brings down the house in her searing portrait of Edith Piaf in the biopic La Vie En Rose.

Cotillard is mesmerizing in a picture that leaves one in awe, a bit emotionally drained, even if the narrative approach is hardly viewer friendly.

Life in a brothel was Dickensian for sure as she sang in Paris for money with her friend (Sylvie Testud). A big break emerged with the help of a music producer, Louis, warmly endowed by Gerard Depardieu. Louis would help give her the name Piaf. Her career would be a whirlwind one with love and tragedy as Edith falls hard for a middleweight boxer (Jean-Pierre Martin). By early middleage her existence is one of physical, emotional anguish and addiction.

Manon Chevalier is Edith at age five and Pauline Burlet taking over when she is ten. Cotillard, then, fills the part with an amazing, convincing range from ages 16 to 47. She controls her many scenes so forcefully that she is sympathetic even when her cruelest moments occur. She is benefitted with a solid cast and a lovely production design.

Perhaps the rhythm is spotty as events jump back and forth from 1918 to 1963, with the events hard to absorb, even rather confusing. And the editing in the last act diminishes the power of Piaf's penultimate, yet still magnetic, "Non Je Ne Regrette Rien."

There is no effort to get into aspects of her personal life regarding a husband and child, as well as her gallantry for the French Resistance during World War II. Still, this remarkable artist is done vicariously through Cotillard with much fascination as she makes this Judy Garland Gallic woman hurt by booze and painkillers someone to behold.