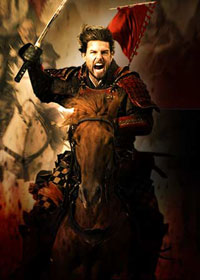 Tom Cruise's Last Samurai stretches our emotions and spirit of adventure in a production by director Edward Zwick (Gladiator, Legends of The Fall).

Cruise's Civil War veteran Nathan Algren travels to Japan in the 1870s to help organize the emperor's troops during a time when modern weapons were on line to replace the traditional battle implements of a feudal system. Algren's task is to move the Japanese Army into the 19th century.

The film flows in a number of directions but the major thrust is the emotional battle of the Samurai to preserve their mode of battling along with Algren's battle to forget slaughters he was a part of when battling American Indian tribes. The images that remain are those which dominated the 1970 film Little Big Man, staring Dustin Hoffman. They reflect the destruction of innocent women and children and the pain of the images has Algren, in a near perpetual state of drunkenness.

Algren is beaten and wounded so often he begins to look like Rocky rolling on the ground refusing to stay down when he is first confronted by the Samurai. But he is not the only character to be beaten, chopped or shot. The new weapons like cannons and the first semi-automated guns are destined to win out over the traditional elegant dignified, classic battle style of the Samurai.

Director Zwick drains us at time with his long production (nearly three hours) but then brings rewards for the build up both of the emotional power of Algren's conversion to the Samurai side and the kamikaze like battles they are destined to fight at the climax.

The battle scenes are spectacular and at times, Cruise looks like Neo in The Matrix, as he strikes out even when outnumbered five or six to one. And Algren reaches for our sympathy with his tormented mind and eyes which slowly begin to see the dignity and courage of the Samurai, even the one he has killed. Their reliance on tradition and sacrifice along with blind loyalty to the Emperor (Shichinosuke Nakamura) appear more and more admirable to the estranged army officer. As we follow the customs of the Samurai particularly through Katsumoto (Ken Watanabe) who carries the essence of Samurai, we find our sympathy more in concert with their bravery and willingness to commit everything to the task at hand.

The spectacular scenery, beautifully photographed creates a contrast with the vicious bloody traditional open field battle fighting. In the same manner the battles contrast with the developing warm emotions and respect which become prominent in Algren's relationship with The Last Samurai.