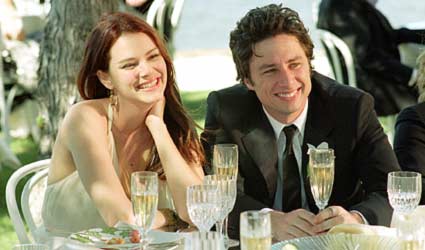 
A remake of Gabrielle Muccino's Italian comedy-drama, The Last Kiss is another starring vehicle for Zach Braff, best know from the small-screen success, "Scrubs."

This time, the result is more uneven and ultimately emotionally overpacked, as the focus is on Braff's Michael, an architect who seems to have everything going for himself.

Michael has a progressive girlfriend in Jenna (Jacinda Barrett of Poseidon and upcoming in School for Scoundrels). They're getting serious and he becomes infatuated by the younger, coquettish Kim (Rachel Bilson of TV's "The OC").

Haggis also puts a perspective on the where Michael's friends and Jenna's family are at. Chris (Casey Affleck) has a needy wife (Lauren Lee Smith) and a baby boy. Izzy (Michael Weston) has just ended a long-term relationship, and Kenny (Eric Christian Olsen) is having fun with a girl (Cindy Sampson) he's just getting to know. Jenna's father and mother (Tom Wilkinson and Blythe Danner) have all they can handle to preserve a 30-year marriage.

Braff is required to carry the viewer through it all with his screen presence, and is fairly sympathetic even when Michael acts dumber than someone like him probably would. Affleck, Ben's younger brother, is developing into quite the character actor, as Chris is quite funny and appealing. The consummate pros in Danner and Wilkinson come on with sharp, steely reserve. The bright Barrett is hardly developed so the barometer of Jenna and Michael isn't fully rounded.

Whereas Muccino's 2002 film was more fully rounded and genuine, Goldwyn's intent underscores the heavy lifting that must go into any worthwhile companionship. The amusingly acerbic, sexy opening scenes, however, give way, with some intelligence, to something very maudlin and serious that detracts what vividly had led to it. Still, this new version of the ups and downs of commitment and romance can be bracing, if in a shadowy way.