Lars and the Real Girl 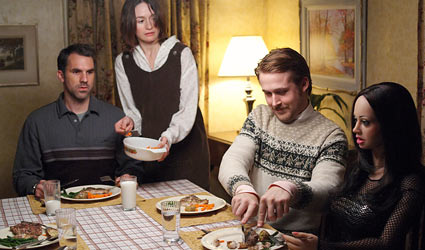 
Lars and the Real Girl is one of those peculiar comedies that wins you over because of the sensitivity to the storytelling.

Under the careful direction of Craig Gillespie (credited for the rotten Mr. Woodcock), Ryan Gosling (remembered for The Notebook and his Oscar nod for the indie Half Nelson) is awkward, lonely midwestern office worker Lars Lindstrom.

One day Lars learns that on-line there are "anatomically-correct" girls. It could be played for cheap, risque laughs, but when he gets a "life-size" one, he names her Bianca, a Brazilian/Swedish friend.

Obviously, Lars's brother Gus (Paul Schneider) and his sister-in-law Karin (Emily Mortimer) are more than a little caught off guard by the his new girlfriend.

Patricia Clarkson is an understanding doctor who tells Gus and Karin to be positive to his situation as it is an important, if delusional point in his life.

Gillespie brings the snowy setting with its gradually accepting community alive as Bianca "volunteers" at the local hospital. The translation of this delicate material works primarily because of the way Gosling handles the character's mindset as this silicone mannequin has quite an effect. Some may see the portrait as mannered, but with plausible backup by Kelli Garner as an infatuated girl, a whimsical humanity emerges with feeling for the case that Bianca is real.