Lady in the Water 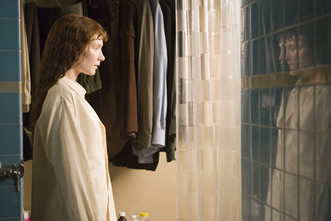 
M. Night Shyamaian has his own unique style of film; it's almost a brand. We have come to expect the unusual even the unusual with a twist.

Lady in the Water, a fairy tale that begins with animated stone cave like figures which help to explain the story of man in the water and separation of those who moved to the land. The water people are the teachers and they come to the surface periodically, but a danger exists when they are out of their element. Dark wolf like creatures with red eyes and long hair seek to destroy them.

As Bryce Dallas Howard comes to the land she finds herself in an apartment complex filled with unusual characters lead by the maintenance man (Paul Giamatti) a stuttering confused insecure man. One resident exercises only one side of his body creating an odd physical imbalance. Shyamaian himself is a character who lives with his sister. There are a group of sisters and a film critic in the mix.

Howard is referred to as a Sea Nymph, but she appears more as a frightened young woman who is without the safety of her environment. Giamatti who is the prime character learns of the NARF though a young Asian woman who interprets the ancient tale from her mother who does not speak English. We learn of the evil animal characters and that three others exist to be protected from the evil red eye creatures.

While Giamatti drinks milk as if he is in a commercial, he learns that the healer attracts butterflies and that the Eagle will return in safety. A cross word puzzle helps solve the mystery but how it connects is not disclosed. While Howard spends time sitting in the shower imparting a look that would be fitting for Madison in Splash, Giamatti performs heroically and believably as the protector of Howard and the family in the building.

Even the long hair beasts are not truly frightening, but they do dispose of the film critic, which is probably revenge on Shyamalan's part anticipating the reviews his film would receive.

As the film drags on without reward, one character says this will be all over in moments - I wish. The two hours appear to take forever, and one negative character sees the world through a faulty pair of eyes and believes it is hopeless. A great description of this disappointing work.

The climax pits the monsters against each other but they look like something from an early Godzilla with no excitement. Without Giamatti's effective compelling performance it could have been even worse - but not much.