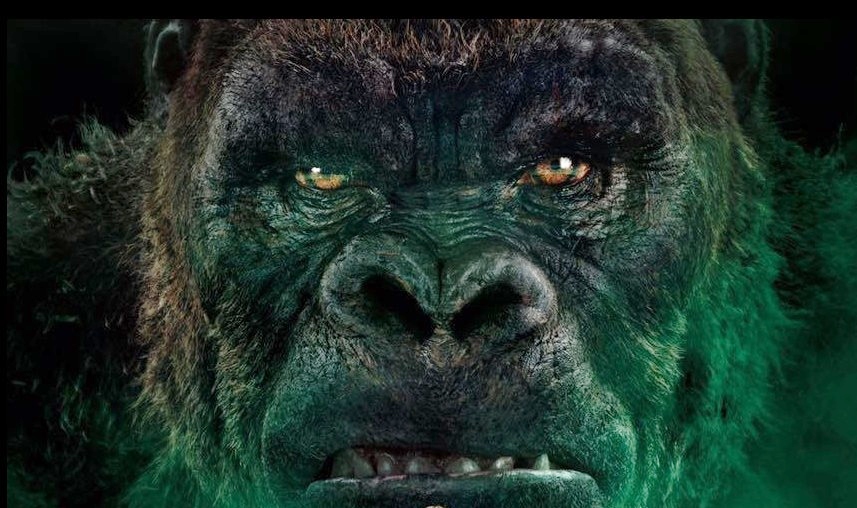 
The idea of a hidden island in the South Pacific inhabited by native tribes and numerous pre historical animals mostly dinosaurs and one giant "King Kong" who rules over the island by defeating the other animals in battle and accepting offerings of young women from the islanders is not new.  It was dark (black and white) in 1933 and at a time when perhaps there was an island somewhere out there where evolution did not arrive and these extinct creatures continue to live.  There certainly were no satellites to search the South Pacific and so we could almost accept the extreme world of "King Kong".

Kong got to fight with Godzilla in a 1962 film, he got to carry Jessica Lange around in 1976 and Naomi Watts in 2005.  None of the newer women lived up to Fay Ray's performance and academy award winner Brie Larson is just along for the ride in this version.  She is one of two women on the trip and her job is to take pictures for Life Magazine.  Her contact with the giant Kong hints at the early relationships women had toward Kong but it pails and Larson has little to do.

Kong: Skull Island takes place in 1973 a time when there is great disturbance in the American politic, the Viet Nam war is winding down and students are protesting at nearly every college campus in the nation.  John Goodman believes he has located Skull Island from a NASA satellite picture.  Pressuring his favorite Senator Goodman gets the money he needs to make the trek to locate the fogged in island and also secures a military support group lead by and angry Samuel L. Jackson.  Jackson is unhappy with the apparent result of the Viet Nam war he is eager to take on a new challenge finding something new on a hidden island rather than sitting and watching what he believes is a loosing war in Viet Nam.

Tom Hiddleston is along for his knowledge and skill, Larson brings her camera, Jackson brings anger, Goodman functions on the hope he will be part of a discovery which he has believed in over a very long time.  The most interesting character is played by the skilled performer (John C. Reilly) who at the beginning of the film is shot down in his World War II fighter over the island and has made the island his home for nearly 30 years.  He has blended with the natives, who are made up to look frightening.  His story is the best the script has to offer, he is a man who has been missing from his family since WW II and would love to join the new visitors and head back to the good old USA.

Kong is almost secondary, he appears as the helicopters fly in the military unit and the civilian group into the air space of the island.  Jackson starts a fire fight and Kong smashes down most of the team of helicopters.  That is usually the climatic scene at the end but here it comes as soon as the giant star comes on the screen.  The island is held in check from the numerous pre-historical looking creatures by the strength of Kong.  Kong is strongly supported and respected by the natives because he keeps the island safe for them.

Jackson after loosing a number of men in the original conflict wants to destroy Kong that puts him at odds with some of the folks he is there to protect and the natives who need the Kong.  From there on we see various slaughtering of the animals and many of the folks who are part of the group searching for the secrets of the island.

It quickly becomes a special effects slam bang with some homage to the 3D process, but fails to bring us into a special world as the other Kong films have and there is little new here, except John C. Reilly's character who is featured at the end on the film.  As the credits begin to run we hear the music "We will meet again" from the forties which is appropriate for Reilly's character, it also makes it clear that there will be another segment for this series and after the credits there is a preview of the next installment.

Even King Kong would be unhappy with this version which pails against all that have come before.