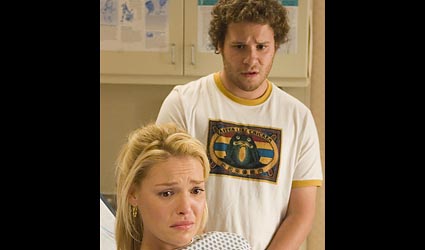 
Seth Rogen is the slovenly, often stoned Ben in Judd Apatow's Knocked Up.

The title itself will be a draw for those looking to find raunch and romance, though Apatow comes up well short of the comedy he mined with Steve Carell in 2005's late summer surprise The 40-Year-Old Virgin.

The main conceit here has Ben, who works with his buddies on creating a website ideal for randy guys, having a drunken one-nighter with Alison (the fine Katherine Heigl, known for her quality work on "Grey's Anatomy"). And, a couple of months later her symptoms prove right - she's with child.

Like Virgin, Apatow has a way to illuminate the differences in characters, especially through profane language. And, as a result many jokes arise about love, marriage, babies, and making relationships work. It's about trying to bridge the very immature with the upscale. Ben seems to get by on some compensation, while Alison has to disguise her pregnancy as she gets her career as a prominent interviewer for "E!" television.

Apatow's script takes the viewer on various week increments with sneak peeks of Alison's future bundle of joy. One gets the picture that Ben has to be made into a man not just because he couldn't put a condom on one night. The gags also relate to the director's previous TV oeuvre, which includes the brief run of "Freaks and Geeks." Overrall, though the visual element isn't that polished, and the interest begins to wear thin well before the finish (which may feel longer than Alison's pregnancy).

Still, some of the interludes (though feeling like a recycled 80's sitcom) have some hipness, in spite of the old-fashioned, as Ben talks with his dad (Harold Ramis) and Alison to her mom (Joanna Kerns). And, each bonds with the couple that Alison has resided with - her stepsister (a pretty funny Leslie Mann) and her long-suffering husband Pete (Paul Rudd). Rudd, Mann, and Rogen have a decent feel for what is sometimes lowbrow, having been in Virgin, and Heigl handles Alison's anxiety with more flair than expected.

But, Knocked Up unfortunately feels more like a knock off of a better crude comedy, though it's very current as Ben and his pervert friends know so much about movies, and someone has already seen Spider-Man 3. And, there are cameos by Carell, James Franco and Ryan Seacrest, the latter seen almost in self-parody.