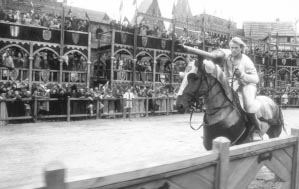 A Knights Tale is a clever and refreshing medieval adventure about a young squire who dreams of  enter jousting tournaments.

Born to a lowly thatcher, William (Heath Ledger - The Patriot), longs to be a knight and compete in jousting tournaments.

William's friends, Roland (Mark Addy) and red-headed Wat (Alan Tudyk), help him prepare for the matches in a funny comedy-of-errors sequence.  But, since only men of noble lineage need apply, Geoff Chaucer (Paul Bettany) an author William meets on the road, forges the necessary paperwork and he's off to his first competition.

The stunt work is exciting and realistic.  Riders dressed in heavy, cumbersome armor, gallop at full speed toward one another with lances thrust out to knock their opponents off their horses.  The camera work is up close and personal and pretty thrilling stuff.

To the throbbing beat of Queen's "We Will Rock You," William enters the arena to meet his fate.  The crowd, who sway to the music and even participate in an impromptu "wave", supports the winner.

William and his entourage travel all over Europe entering competitions and as he wins more often, Count Adhemar (Rufus Swell) becomes his rival both in the arena and off, as they both compete for the love of Jocelyn (Shanynn Sossamon).

What is so great about this story is that it could be set in any time period and be about any young person wanting to do well in sports.

Because William is poor, he has to enlist his friends to help him out.  Roland and Wat pretend to be his servants, a female blacksmith donates her work on William's armor and Geoff uses his gift for gab to double as his announcer and works the crowd like a wrestling promoter.  In fact, you almost expect him to yell out, "Let's get ready to rumble."

A Knight's Tale has everything to make it a thrilling adventure, a charismatic star, terrific cast, creative writing and an entertaining story.  It's a lot of fun, I enjoyed every minute of it.