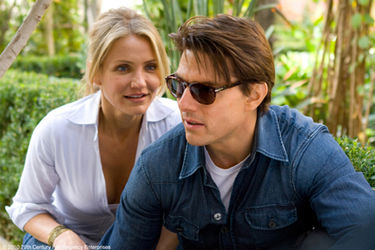 
This early summer spy caper is ideal escapist, undemanding entertainment, frenetic and a bit feisty like its main characters.

Knight and Day stars Tom Cruise and Cameron Diaz in a romantic, lighter take on something like True Lies as one is eased into many elaborate set-pieces through sexless banter.

Cruise's Roy and and Diaz's June would appear to make a palatable couple after she runs into him in the airport on the way to her sister's wedding. But, midair mayhem occurs with a crash-landing in a cornfield and June ends up at home (in the Boston area). Some of the early, chase-oriented scenes are situated in and around the Mass. Turnpike.

Director James Mangold (Walk the Line) and scribe Patrick O'Neill lazily work up an adventurous romance as a quick-healing Roy (maybe an imbalanced rogue CIA agent) and June with a special bridesmaid dress are off to Spain and the Azores among other exotic locales (shot on location with much CGI).

You see, a ruthless, yet well-trained Roy has to protect June on route to meeting an eccentric inventor (Paul Dano of Little Miss Sunshine) and a slippery arms dealer (Jordi Molla). While competent thespians like Viola Davis (Doubt) and Peter Sarsgaard (the sly, culturally refined suitor from An Education) among the operatives trying to apprehend him.

Part of the enjoyment may be seeing a more self-effacing, looser Cruise than usual, though Roy's cockiness is meant to offset June's likeable, ditzy nature. His modus operandi is a cleaner one than in Valkyrie or the compelling Collateral even if the body count is rather high. The slapstick cup runneth over with the right amount of silly ebullience. To make it all work, the often undamaged stars have to inhabit their roles than really etch out well-rounded characters.

Knight and Day manages to be enough of good time with plenty of pert dialogue while the duplicitiousness and risk-taking is smoothed over. You'll probably think that Roy and a periodically sedated, increasingly spunky June are probably meant for one another in this type of miraculous, unfussy expensive fare.