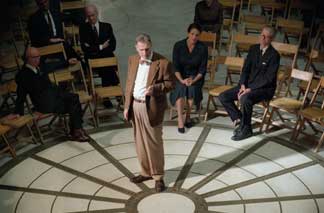 A very intriguing, smartly crafted biopic from Bill Condon (writer of Chicago) concerns the relatively un-remembered “sex doctor” Alfred Kinsey. In Kinsey, Condon gets a strong lead performance from Liam Neeson that effectively steers away from philosophizing that would ingratiate the Moral Majority.

The finely calibrated script by Condon proceeds in flashback early on with Kinsey interviewed by colleagues played by Timothy Hutton, Chris O’Donnell, and Peter Sarsgaard (Garden State). His firm upbringing came from a religious father (John Lithgow) and his education led him to zoology where he became immersed in studying the wasp.

He then switched over to the human species and his approach was something that even today is hardly conservative. He began to explore the dangerous subject of sexuality. Many, many interviews later his findings were more than a bit surprising but ignored mainly because it’s not something that people like to open up about.

Condon goes about it all in an even-handed, audacious way with revelatory views on sex by Kinsey as the film has an introspective arc that compares to Ron Howard’s A Beautiful Mind. Kinsey’s sexually adventurous wife is acted by Laura Linney (Mystic River) with passion and sensitivity that echoes the notion of “opening your eyes and seeing it.”

This unbiased account will give some viewers a new perspective based on Kinsey’s findings and what the human condition entails. If any of the characters may be trapped in their roles they seem to be able to stretch and roll with the controversy that comes with it. Kinsey becomes more deeply felt, wonderfully balancing integrity with sharply humorous moments. A penetrating humanity surfaces as the gap between what we assume people do and what they actually do is a persuasive commentary on contemporary society.