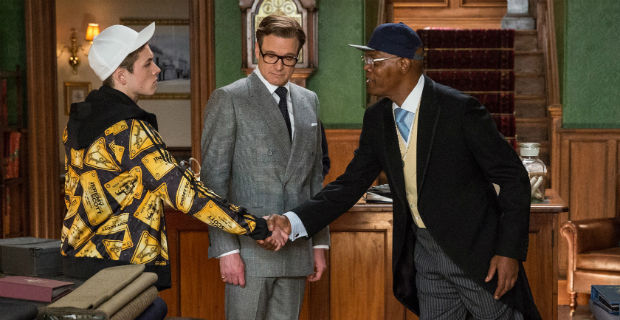 A boundary-pushing, even exaggerated (but not that anarchic) Kingsman: The Secret Service stars a quite nattily attired Colin Firth, Samuel L. Jackson, Michael Caine and Taron Egerton and gives the prototypical genre character a rather suave, swift makeover with shades of the director's Kick-Ass and a little of George Bernard Shaw's Pygmalion.

A mission gone awry in the Middle East nearly two decades ago prompts Firth's Harry Hart, ala Galahad, a member of the eponymous independent top-secret organization who lost agent 'Lancelot' honor the fallen colleague's son Eggsy (Egerton) later in the present into a spot of bother to call upon Galahad to get him off an auto theft wrap and take up under his wing to rise over other apprentices.

The shifty tale (filled with racy lines and unpleasant action) from Vaughn and frequent collaborator Jane Goldman immerses action comedy and serious drama into espionage thriller as eccentric billionaire Valentine, a very nutty lisping Jackson (the dapper 'Capital One' spokesman enjoying doing the Alec Baldwin memorable line "What's in your wallet?") has an unorthodox, if extreme scheme to combat global warming. Those 'Round Table' dedicated knights are given the difficult task to put a halt on what Valentine (whose feelings about violence attracts some uproarious interludes) intends, with actual politicians in jeopardy, as one of his lithe henchmen is limb-bladed.

Firth in his Savile Row suits can easily put himself into the most murderous positions after the early more customary earlier reels establish relations to shape up a miscreant of an upstart with potential as a notably startlingly, lively set-piece is set to the iconic tune Freebird. Merlin has Q-like aplomb and is played by the usually reliable Mark Strong (The Imitation Game) while Arthur as an aging bureau chief is given an unctuousness by Michael Caine. Mark Hamill who'll return at year's end in the much anticipated Star Wars: The Force Awakens isn't very recognizable as an antediluvian British professor. And, Egerton hits his marks well, especially opposite the truly game Firth with an earthy honesty shunning an often clichéd portrait in use of colleagues to neutralize a very deceptive and formidable adversary.

Before an adept Daniel Craig returns in another Ian Fleming creation, an unevenness or ominous sinusoidal tendency in the filmmaking oddly injects interest in character and plot viscidity as Vaughn and Goldman know their way around seasoned, silly brutality with eruptive originality (in one 'kill-shot' scene that will be talked about by many so better to avoid the advertising if at all possible).

This kinetically fueled Kingsman knows how to fiercely exploit The Secret Service in ways that may be a tad unsavory for the uninitiated (read: fanboy) and cognizant of its antecedent and motivational sardonic nods in navigating from the privileged through poverty. Nonetheless, it's far from enervating excessive tomfoolery with charged innuendo and profanely calculated manners to spare as an entire pub would agree.