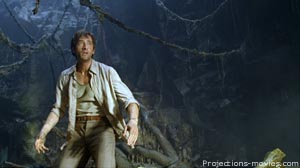 
Director Peter Jackson said he cried at the end of Kong (he saw the original (1933) when he was eleven, so did I). I didn't but my head was filled with the spectacular images produced by director Merian C. Cooper. King Kong in 1933 has always made my top ten films for the twentieth century.

Now director Jackson brings us a far greater spectacle (with today's special effects) and a far more effective role for Ann Darrow (Naomi Watts) who is less a captive of the giant monster and more of his protector from humans as he is her protector from a myriad of CGI animals who can't wait to consume her.

Perhaps the most enjoyable effects come at the beginning when Ann is a hoofer in a vaudeville show dancing to Al Jolson's "I'm Sitting on Top of the World" as we see a tent city in Central Park, New York. The recreated Broadway filled with yellow cabs and actors in depression era clothing. Ann is a dreamer and optimist we can almost hear her saying "I believe, I believe." When her show is closed down she has the opportunity to join a burlesque, but skips away from that job and reaches for the famous five cent apple. In comes Jack Black's Carl Denham a more ruthless promoter than he was in 1933. He seizes the opportunity, buys the apple and dinner and persuades her to take a job with a long sea voyage, excitement and fame. We watch as she takes her first tentative step up the gangplank up to the warn ship Venture.

What she doesn't know is Denham is washed up - he has film footage but no studio support for this film. Leaving on the Venture in the middle of the night with his stolen film and a wardrobe for Ann. It's a size four perfect for Fay Wray but she is making a movie over at RKO. Denham also tricks writer Jack Driscoll (Adrien Brody) and he is forced to accompany the worn crew on the trip to the South Seas, his reward will be a shipboard romance with Ann Darrow. But West of Samatra he will enter Skull Island, a world mastered by King Kong.

The fog, the wall and the barrier rocks suddenly flair up and in a village where everyone appears old or young; mud covered natives shutter in fear. But Watts is more and more radiant as the film progresses. She does her share of screaming but also dances to save her self, talks to Kong and slams him back when she has had enough of his pushing her around.

The capture of Darrow is nearly poetic, the natives swing from outcropping to outcropping on what appears to be a vaulting pole and she is placed on the end of a wishbone device and lowered into Kong's domain.

Kong who prefers to sit and eat bamboo is forced to fight raptors, T Rex, and flying reptiles to protect himself and Ann takes it all in stride. But the crew that falls into the canyon filled with roots as they are shaken off a log bridge must face giant roaches and lizards to survive. For those who don't like bugs this will be a challenge to watch. The battles are brilliantly choreographed and provide some of the best scenes in the film. Later, Kong breaks open a jaw and Ann dances and juggles for him then they both take in the sunset and fall asleep on a ledge overlooking the river.

By that point we care about Kong more than we did in the 1933 version and we find ourselves on the side of Ann who is opposed to capturing the eighth wonder of the world.

If this were a book the chapters would be "New York City", "The Voyage", "The Island", "The Capture" and "Broadway".

The dark Carl Denham gets to give his famous last words and Kong escapes into the night destroying Broadway and ending up on top of the Empire State Building. But not before we see a very effective Naomi Watts, a wonderfully attractive, exciting and dangerous island, a beast that has eyes that understand and a just acceptable Jack Black.

King Kong is what movies are about: we get to visit a fantasy world filled with unreal characters. They bring us on a trip we know can't exist but the effects form a real image in front of our eyes. And with Peter Jackson's imagination we think maybe it could exist.