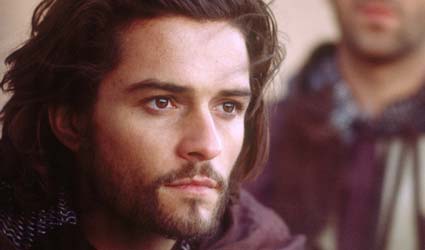 The picture opens in 1184 with Sir Godfrey (Liam Neeson), a nobleman returning from the Crusades, seeking out Balian, his illegitimate son. After a few sword fighting lessons, he tells his new found son, he would find Jerusalem a good place to live and prosper.

One hundred years prior to this time, Muslims and Christians coexisted peacefully in the Holy City; later the city became a prize to fight for.

Edward Norton plays the City's ruler, King Baldwin who suffers from leprosy which requires him to wear gloves, long garments and a silver mask. He continues to rule but his body and voice are weak and his ambitious enemies wait for him to die and for power to come to them.

Balian goes to the Holy City where he romances the King's sister (Eva Green), makes an enemy of her husband and helps to defend Jerusalem from the Arabian Army lead by Saladin (Chassan Massoud).

The Crusades were a horrible Holy War, but surprisingly Balian helps to protect and fight for the Christians only because he believes it is the right thing to do, not for any deeply held personal religious beliefs. He's an honorable man and when he gives a pep talk to the terribly outnumbered Christian force before the big battle, he asks them to kneel and he makes them knights which is expected to give them courage to fight.

Bloom did bulk up somewhat for this role, but he is not your usual brawny hero like Russell Crowe or even Brad Pitt. He does, however, convey a quiet command and determination as the brooding Balian.

Scott is a master of the big action film (Black Hawk Down and Gladiator) here his climatic battle scene between Muslims and Christians is classic. A single warrior is seen in the distance and as the camera pans back, masses of men appear marching over sand dunes with showers of flaming arrows swooping into the walled city followed by massive balls of fire hurling through the air. The Christians are prepared, they pour oil over the invaders scaling the wall and light them on fire, it's quite a spectacular scene.

Kingdom of Heaven is very even handed in its portrayal of the Christians and Muslims. Each is shown to be battling for what they believe is right, except for a few evil characters on each side. Terms are worked out to end some battles and agreements are struck between the warring factions after the main battle allowing the Christians to walk safely away. These ancient warriors could perhaps teach our present day leaders a thing to two.