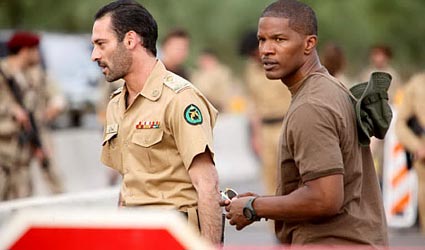 
Peter Berg's The Kingdom unfolds in short spurts with striking documentary realism, but the veteran actor and director of the involving Friday Night Lights doesn't blisteringly reinterpret the clash of Middle East meeting the West.

Starring Jamie Foxx, Jennifer Garner, Chris Cooper, and Jason Bateman, the picture initially gives some archival background into the the connection between Saudi Arabia and America. It actually had to do with drilling for water on the Arabian peninsula.

After the director provides some education that really doesn't help the viewer in the long run, Riyadh, the Saudi capital provides the location (most of filmming occurred in Abu Dhabi) for suicide bombings on westerners living there through work with a U.S. oil company. A friendly softball game is going on before the mayhem occurs.

Foxx, better in Jarhead as a military man, here is whip-smart FBI special agent Ronald Fleury who takes off in defiance of US Attorney General (Danny Huston) to avenge the attack leaving 35 dead and 160 wounded, one of whom was a fellow agent.

The most interesting relationship in a scorching foreign land with lightness made of the disorienting culture shock is one between Fleury and the helpful Saudi Colonel Faris Al Ghazi, done with suspicious efficiency by Ashraf Barhom. Col. Faris is the tour guide to the danger zones for the agents. Garner's forensic scientist Janet Mayes is seen often in t-shirt and jeans, and Cooper's Grant Sykes and Bateman's Adam Leavitt just don't register in an unexciting search. The nature of Leavitt's situation parallels one in the more somberly compelling A Mighty Heart concerning Wall Street journalist Daniel Pearl.

The fast editing in spots renders The Kingdom to be heavily patched, and that isn't for the better as the original cut is now under two hours. Michael Mann's producing imprint is evident, but in "cracking the case" the close-ups and hand-held camerawork just doesn't stand out as entertainment as the combat becomes more visceral and brutal to say the least. If you see this "slashed" cut, see it for the Faris/Fleury exchanges and for a smarmy Jeremy Piven as the US ambassador to Riyah. But the Fleury's character visit to his young son's school is really "below the belly-button" even for the FBI.