The Killing of the Sacred Deer 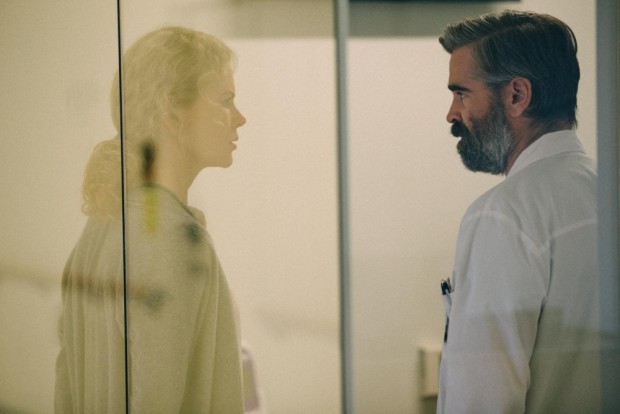 
Greek director and co-writer Yorgis Lanthimos' second English-language feature is very distinctive (definitely propelling him further up on the ladder of his modern peers), as grim and clinical as it may be.

The Killing of the Sacred Deer probably won't have the 'legs' of The Lobster (both featuring Colin Farrell) influenced by a Euripides tragedy with Agamemnon and Artemis (goddess of the hunt) displaying much classic control that past and present auteurs would take notice.

A certain kind of logic and rigor dominate the proceedings feeding into guilt and retribution, as well as haughtiness and hypocrisy, that sets up psychological horror with matter-of-fact malevolence that can be persuasive, even intoxicating. As well as a distressing watch for discerning cineastes.

Farrell's Cincinnati-based cardiac surgeon Steven Murphy has a close, if cautious relationship with a 16-year-old boy (Barry Keoghan of Dunkirk) whose father died of cardiac arrhythmia. Keeping it away for a while from his family, including unsuspecting ophthalmologist wife Anna (Nicole Kidman, who did well opposite Farrell in Sophia Coppola's The Beguiled earlier this year).

The clamps begin to tighten on the Murphys as Farrell and Kidman endow the couple with steely, sensitive sides that empower even as the former's disaffected nature has an effect to compliment Lanthimos's idiosyncratic stylishness. It must be said that the Irish lad in Keoghan is quite the intuitive, cogent presence with an invitation that is difficult to refuse. Especially when it concern's the couple's daughter and son and neurological implications.

From hearing Schubert and an eye-opening depiction of working within ventricles and atria to a hunting rifle The Sacred Deer broods appallingly as a subdued vehemence from the performers and storytelling to the filmmaking lingers. From the tracking, zoom and low-angle shots themes roiling from regret and anguish are evident. With Bill Camp and Alicia Silverstone as an anesthesiologist colleague and a hardly wistful tart-making widow, respectively.