The Kids Are All Right 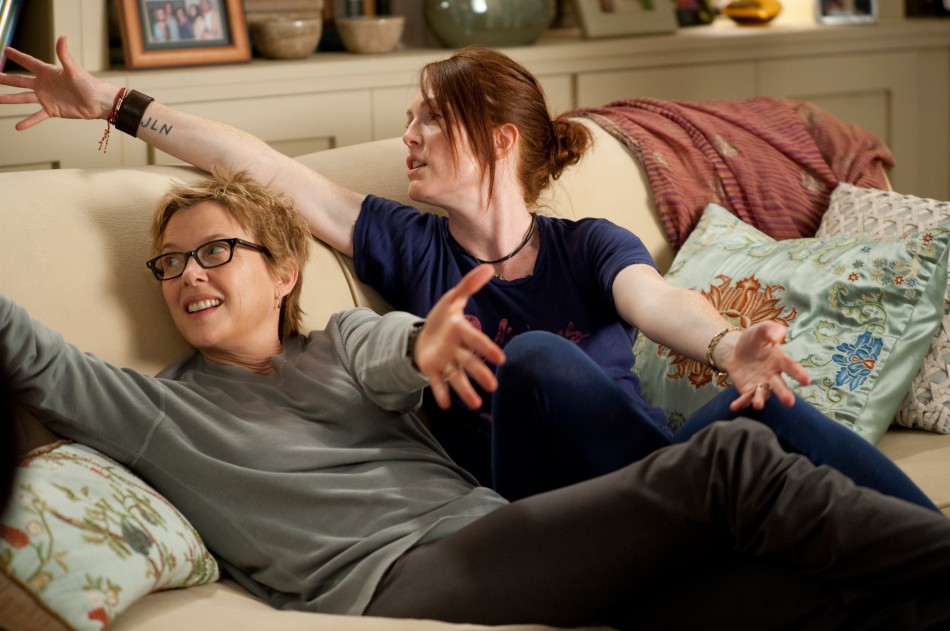 
Director and co-writer Lisa Cholodenko manages a spry, well-drawn portrait of a modern family in her latest Southern California-set picture taken from but not spelled the same as a track from rock-n-rollers The Who. It has most appeal to discerning upscale cineastes, but looks to attract the kind of following to earn summer sleeper status.

The Kids Are All Right stars Annette Bening, Julianne Moore, Mark Ruffalo, Mia Wasikowska, and Josh Hutcherson, as the capable cast is benefitted by the free and easy screenwriting of Cholodenko and Stuart Blumberg (Keeping the Faith) as it doesn't seem to be to pleased with itself even with the oft-repeated "I'm just sayin'".

Nic (Bening) and Jules (Moore) are a happy lesbian couple for nearly two decades with two kids through artificial insemination, 18-year-old Joni (Wasikowska) and 15-year-old Laser (Hutcherson) who are pretty much as the title indicates. Joni has matured into a thoughtful young woman while Laser is into girls and sports and spends time with a bully.

What is rendered for the most part with wit and honesty (especially for gay marriage backers) is unexpectedly adroit in gravitating between family drama and romantic comedy. Just after her big birthday, Laser has Joni follow-up on the intention to reach their bio-dad, and Ruffalo's Paul (motorcycling-riding locavore restauranteur into organic gardening) agrees to meet them when notified by the sperm bank.

The director is able to invite the viewer with usual tactile panache into a bohemian environment as the family begins to be upended as "moms" learn about the guy the kids like being around. Nic, a principled doctor, takes pride in rigid parenting with her life partner, but Jules (the biological mother), who is beginning a landscaping venture, is drawn to the sperm donor who wants her to spruce up his back yard.

Issues presented here aren't far-reaching though it all, as improbable as it may seem, has a sure-handed, warm presentation to it. If you don't always get how Nic, Jules and Paul act the way they do, Bening (Mother and Child), Moore (A Single Man) and Ruffalo (Shutter Island) make them winsome in offbeat strokes. Hutcherson (Journey to the Center of the Earth and Bridge to Terabithia) and especially Wasikowska (Tim Burton's Alice in Wonderland) register well, the latter underscoring her character with some petulant disorientation.

In only her third film, Cholodenko proves to be as committed to her work as a more seasoned pro giving the shimmering burnished proceedings a personal touch with production designer Julie Berghoff knowing the kind of decor to highlight certain frames at the right time. When it comes to guilt, passion and trust, The Kids Are All Right, like the easygoing less controlling guy in Paul , fits it all into relational angst in a timely and remarkably sensible way.