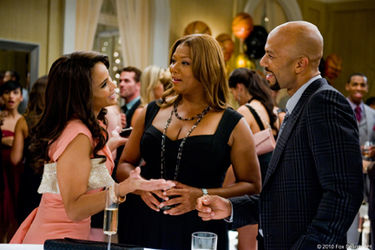 
I'll say it from the beginning, this movie was Just Wright! Using a twist on the traditional Mr. Right theme – this movie uses Ms. Wright instead in this heartwarming film that has just the right amount of drama, comedy, basketball – a complete story that kept you interested in the characters. Even though it was a little slow in places, and the end was just "there", you still come away with a smile on your face.

Queen Latifah makes a good match with Common in this behind-the-scenes love story of a hard working lady and a popular sports figure, who don't realize they are in love until they are without each other. Common plays Scott McKnight, a superstar for his team who must struggle to recover from an injury and Queen Latifah plays Leslie Wright, a therapist that helps him remember his potential and to regain the belief in himself and his abilities to get back to where he belongs. Each has something to offer the other and their chemistry sizzles on the screen and when it comes together, it's not too sappy even though you know it's going to be a happy ending.

There was good depth and emotion from all of the actors – Phylicia Rashad sparkles as the mother figure in the movie, adding her warmth and her control to the situations and even gets a couple of good laughs from the audience. James Pickens, Jr. and Pam Grier are also a good match as the mother and father to Leslie, offering the feel of a good stable home and support for their daughter. Paula Patton plays the ditzy, status seeking Morgan, who only wants to be a NBA wife, who uses games and manipulation to try to catch a superstar. She knows everything about getting the status, even down to the wine to order with sushi but misses the bigger picture, even when it is right in her face. She is good enough at the end to realize the love match doesn't include her and lets it happen even though she loses her prize.

All of the elements of this movie are a good match, the basketball, the drama from the injury, the inspiration for the recovery, the connection between the main characters and the final realization that you must do what makes you happy in all aspects of your life. The two main characters use each other for strength and love and in the end find the true happiness in their lives. Buy popcorn and a drink, you will enjoy yourself - it is worth seeing, there is good music and lots of funny, inspiring scenes, you will come away with a good feeling.