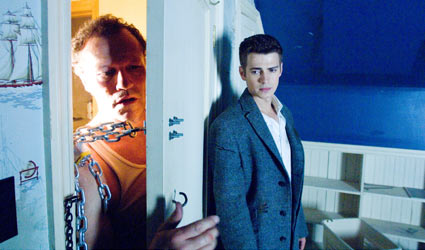 
Hayden Christensen's David Rice is free to move in space. He is a kid who has little respect for his dad William (Michael Rooker) and blames him for mom (Diane Lane) leaving the family when David was five. The two facts are related and David the jumper has a need to understand the connection - but he is unaware that jumping is a key factor in his family life.

While David moves to room 256 in the ELK hotel he also finds himself drowning under ice while in the stacks in the local library helped by Millie (Anna Sophia Robb). He zips from place with no consequence, no purpose and for no explained reason. Egypt to California he just pops up at a new location at will. Unlike James Darren in the 1967 TV series "The Time Tunnel," who had a machine to thrust him back-and-forth in time, David just moves. It's even easier than the transporter on Star Trek.

Over time he becomes a young man and Millie is now (Rachel Bilson) with dark alluring eyes and a continuing crush on the jumper. A trip to Rome with Millie is completed the traditional way, but in contrast he continues to hop from bank to bank collecting the cash for his now posh life style. When his mom appears he learns that everything has consequences. A religious group, Paladins headed by Samuel L. Jackson's Roland, has been chasing jumpers for religious reasons through the centuries and one member of the group is a surprise for David.

While in the Colosseum in Rome he runs into Griffin (Jamie Bell) another jumper who sort of teams up with David for the forced action and chasing in the remainder of the film. They jump in a silly car chase, fly around and participate in battles against the Paladins who have weapons that wrap around the jumpers and sap their strength. The encounters are filmed in trick photography so close up we can't determine what is happening except that it's action.

Director Doug Liman is lost here, billed as a drama, science fiction thriller, there are no thrills, little drama and no science fiction without a device to assist the jumpers to move through space. Even on an international tapestry with some of the great locations on Earth loses energy quickly and sadly ends with all the look of a sequel to come. Let's hope not.