Jumanji - Welcome to the Jungle 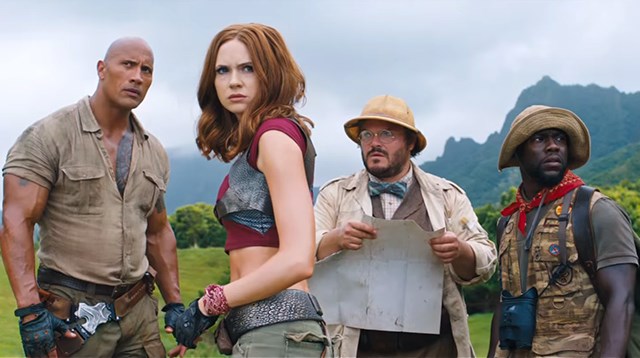 
I wasn't sure what to expect from this movie, the original Jumanji is a classic film and in many ways when this film was announced I wasn't sure the direction they were going to go.  Was the film going to be a reboot?  A remake?  A sequel?  Well, after seeing the film I can honestly say that this film is definitely a reboot, but also a sequel, and a pretty darn good one to boot.

Jumanji: Welcome to the Jungle takes place some time after the original film.  Four teenagers stumble upon the Jumanji game, now in video game form (due to essentially magic).  When they turn it on and select their characters the four teens get sucked into the game and are forced to play the game in order to escape.  To do this, each teen transformed into the character they selected.  Spencer becomes Dr. Smolder Bravestone (Dwayne Johnson), Anthony "Fridge" becomes Franklin "Mouse" Finbar (Kevin Hart), Martha becomes Ruby Roundhouse (Karen Gillan), and Bethany becomes Professor Sheldon Oberon (Jack Black).  Each character has their own strengths and weaknesses that must be used in order to complete the game.

To start off I want to say that each of the video game characters are played incredibly well.  The actors (and actress) does a great job portraying the personalities of their real world counter part.  The biggest standout for Jack Black who does a surprisingly fantastic job playing the personality of a 15 year old phone obsessed girl.  In many ways he steals every scene he is in.  The rest of the cast holds their own very well also but he is the standout.  The film also does a good job feeling like a video game despite it looking like real life which I found to be very enjoyable.  The story itself is also enjoyable, it takes beats from the original and is a story about character growth and becoming a better person for it.  The few references to the original film also helps as a playful nod and also show that this film really is a sequel to the original.

If I were to complain about the film I would say that the villain of the film was rather uninspired and never really felt like a threat to our protagonists.  The story, even though solid and enjoyable, is still somewhat bland and nothing new.  Also, despite it being a "video game" I did find some of the visuals to be a bit dated, but this didn't hold the film back too much.

In the end, Jumanji: Welcome to the Jungle is a surprisingly good film with great acting and some pretty good action.  It is in my opinion a worthy sequel to the original film and should be watched if a fan of the original.  Those unfamiliar with the original should probably still see it as the film stands on its own extremely well.