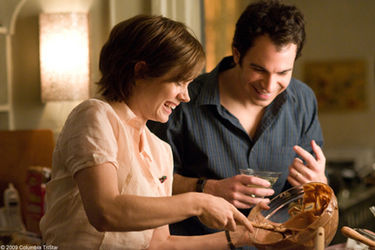 
This light, if lengthy culinary confection is benefitted endearingly by icon Meryl Streep, who ironically started her career in motion pictures in a distaff-powered war-time drama Julia.

Now, the acclaimed actress who has continued to show her range in pics like Mamma Mia and Doubt endows an estimable charisma in Nora Ephron's Julie & Julia as the indelible, now late Julia Child.

It's a reunion of sorts for Streep and Ephron, the latter having written her autobiographical part for the Yale School of Drama graduate in Mike Nichols' dramedy Heartburn opposite Jack Nicholson.

Here, Ephron draws from stories by Child and Julie Powell, the former's "My Life in France", perhaps putting in too much effort to make unify them.

Starting in 1949, Child (Streep) resides in Paris with her diplomatic hubby, a sweet Stanley Tucci. Having plenty of free time and displaying an affection for food she completes her studies at Le Cordon Bleu. And, then she gets together with two chefs (Helen Carey and Linda Emond) to create a French cookbook ("Mastering the Art of French Cooking") for the U.S.

In 2002 New York, Julie Powell (Amy Adams, who garnered an Oscar nod like Streep in Doubt) is frustrated and unsatisfied with her life as an overqualified, overworked post 9/11 claims person. Her editor husband (Chris Messina of Vicky Cristina Barcelona) gives her an on-line push as she relates her experiences of doing all 524 of Child's recipes in a year.

Ephron has the touch here to prey upon viewers not in consumption at the time to make many of the preparations something to behold, even if the transitioning from each milieu similar in what is spoken and felt by the ladies can be a bit distracting.

But, Streep makes the "bon appetit," larger-than-life persona (some filmmaking tricks were made to make the actress's size as looming as the real Child) rather distinctive and ebullient. Her rapport with Tucci (remembered for a drama of struggling entrepeneurs, Big Night) is funny and touching as their life is caught up in the period of the Red Scare. Even if Powell's similar storyline of connecting with her idol and possibilities comes across as more bland, Adams has that kind of old-fashioned charm working for her and has some amusing scenes with Messina. Especially when watching a recreated Child on television or the memorable "Saturday Night Live" sketch featuring Dan Aykroyd.

In the end, Ephron has to wrap things up and Julie & Julia winds up unsmoothly, though in a heartwarming way. Some may think Streep is doing a great impersonation, but little more, yet there is some subtlety, especially in character preparation. There is no wonderful payoff as there is no Sleepless in Seattle signature moment here. Yet, through these two empowered women, important relationships, and, of course, their scrumptious creations, there's something on view to sate most appetites of those culinary artists who won't want to put margarines on their pans again.