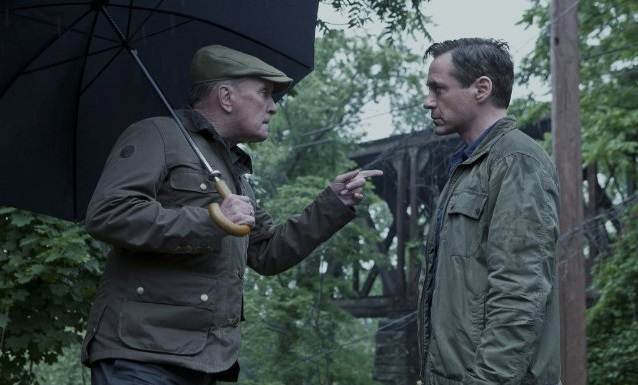 
David Dobkin's male weepie starring two very different (in approach to their craft) and popular Roberts, Downey,Jr. and Duvall, The Judge isn't as interesting or as short as it should have been.

The director of Fred Claus and Wedding Crashers as well as Clay Pigeons does seem to harken back to the days of The Client when the Grisham thrillers were en vogue.

Downey,Jr. is the cynical, hotshot Chicago attorney after the death of his mother who finds it necessary to retain his titular, small-town partially estranged father (Palmer) against a murder charge.

It's a mostly conventional union of the homecoming movie and courtroom drama magnified in part by Janusz Kaminski's lushly hazy lensing. There is some unnerving moments around the primary mystery of whether Judge Palmer intentionally ran over the homicidal man he put behind bars that Dobkin uses to reinforce a father/son reconnection.

A chance for Downey,Jr. to step out of the Marvel universe may be a relief for the rejuvenated, huge box-office star as he maintains a fairly likable, garrulous presence. And, Duvall (in what some may argue is his best character since The Apostle although he's shined in more modest efforts like Get Low) does well in part to get to the heart of the character's conflict. Yet, Dobkin can't stage it all with enough persuasion or finesse to make it more than soppy or anticlimactic. Especially when it uses Mother Nature heavy-handedly or Bon Iver's "Holocene" on a couple of occasions and, finally, Willie Nelson at the close.

At least the mediocre filmmaking gets notable backup from archetypes of varying classifications. Dax Shepard (This Is Where I Leave You) is another attorney, albeit, unproductive, yet encouraging while Vera Farmiga is a former lover who's still in town. Billy Bob Thornton (of late excelling in The Coen Bros. produced small-screen Fargo) is the local district attorney with an oily side and Vincent D'Onofrio whose promising athletic career crashed ("no pun intended").

How The Judge plays out just isn't a creative codification and in spite of its genuine attempts at emotion doesn't make it as deserving of accolades as the efforts of Downey,Jr. and Duvall (each possessing their brand of actorly drive and commitment) may indicate. The pathos just doesn't work here nearly like what it did with Duvall way back in Tender Mercies and his younger, brash counterpart in one of his lesser known, but surprisingly transformative dramas opposite James Woods, True Believer, where a murder case had a more convincing effect on a former civil liberties counselor.