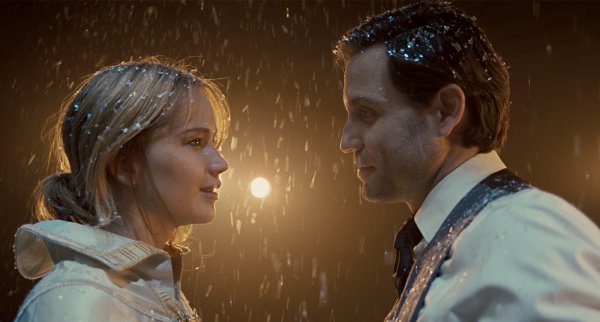 
Joy is another collaboration between Jennifer Lawrence (who just completed her Katniss Everdeen role in The Hunger Games: Mockingjay Pt.2) and David O. Russell (after American Hustle) which appears to be influenced by directing dynamos like Martin Scorsese and Preston Sturges like the demanding director himself.

It's a deceptive (consider the studio's marketing scheme which includes a shotgun) rags-to-riches chronicle with the filmmaker's traditional idiosyncratic touch that doesn't gel as vibrantly this time around. It may be indicated by some noticeable undulations which help fuel the drama and comedy around the distaff empowerment of the American Dream. Russell, the writer, works reasonably well (but not wonders) from a story by Annie Mumolo (a writer of the word-of-mouth smash Bridesmaids which featured Kristen Wiig, Rose Byrne, and scene-stealing Melissa McCarthy).

Darkly wry dysfunctional displays are on hand in what is "inspired by stories of brave women." Lawrence's Joy Mangano, a Long Island single mom (whose surname isn't mentioned in the film) would invent the self-wringing 'Miracle Mop' (also not cited) about 25 years ago and become a shopping network icon.

Of course, the production values can be stellar if you consider some of the musical selection from artists of yesteryear to magnify Joy's professional potential and impetus and personal heartache. A choice, sometimes tantalizing Lawrence really doesn't tap in Joy's deeper emotional recesses as much as she has a slick shorthand to Russell's resonant verses of sheer authentic commitment where less episodic utilitarianism allows overlapping discourse into poised melodrama.

Joy tells her sister, "I don't need a prince" when constructing a paper fairy kingdom, but her heart will be aflutter (briefly anyway) when meeting a television executive of the QVC channel (an efficient, well-cast Bradley Cooper who figuratively dances quite well with Lawrence again after literally doing it with her in the more gritty and poignant Silver Linings Playbook).

The hustle and bustle of a woman who would sit behind quite a desk includes attending to family and kids as much as the former can be dissolute in a zany, maladjusted way. If Joy doesn't mop up (or find its intended niche) at the box-office this holiday season it isn't because the actors aren't really into the chaos of the screwball genre which the demanding filmmaker capriciously enjoys.

Virginia Madsen (remembered from Candyman and Sideways) has droll moments as a soap-opera enamored mother and wife, while Robert DeNiro (amiable opposite Anne Hathaway in The Intern) scores again for Russell (after Playbook) as a Lothario of a dad with a sweet, romantic side. Especially exhibiting a pungent rapport with Isabella Rossellini's endearing, well-to-do backing Italian girlfriend in a tale which isn't the cleansing, creative catharsis that appeared to be shining through.