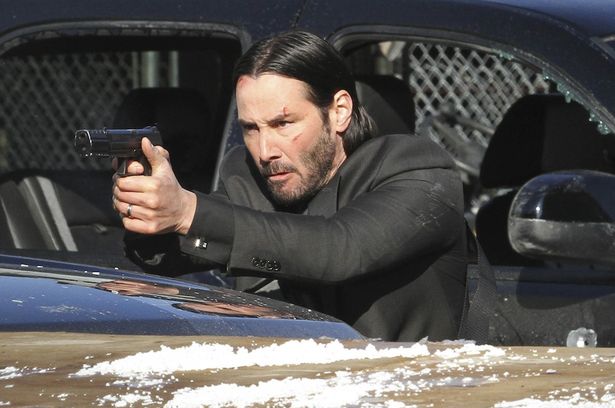 
Too much of anything doesn't work. Keanu Reeves' John Wick is filled with bloody death, in fact everyone in the cast goes down by the end of the last scene except Wick.

It is difficult to enjoy watching the same scene over and over again, here it is Wick's brilliant skill at killing Russian underworld figures. I though Denzel Washington had disposed of the Russian mafia in the recent The Equalizer but Reeves finishes all the remainder here. I lost count after thirty gangsters get it in the head and or chest.

Wick begins the story mourning over the loss of his wife (Bridget Moynahan) She is the only character in the plot to die of natural causes. Her plan for Wick after her death includes a small dog who quickly works its way into Wick's heart. That is strange for the former hit man who quit the profession when he married.

Three Russian underworld characters surprise him kill the dog and steel his mustang. Now they have opened a can of worms which the leaders of the Russian gang are concerned with.

The plot moves from location to location where Wick kills six to ten bad guys at a time. We don't consider Wick a bad guy I guest he is the hero here and his kills are perfectly acceptable. He has a clean up crew at his heals and they remove bodies and other tell tale materials form the battle locations

One interesting factor in the story deals with a neutral hotel where all the bad guys must get along, it's the neutral zone. When one defies the rules in the zone a circle of assassins take them out. How they survive the shots across the circle that don't hit a gun man on the other side of the circle.

The motivation for this revenge flick isn't strong enough to get us cheering for Wick and it just becomes a numbing bloody shoot-um-up.

This is one filled with action and no thought. If that is your pleasure sit through John Wick's bloody adventure.