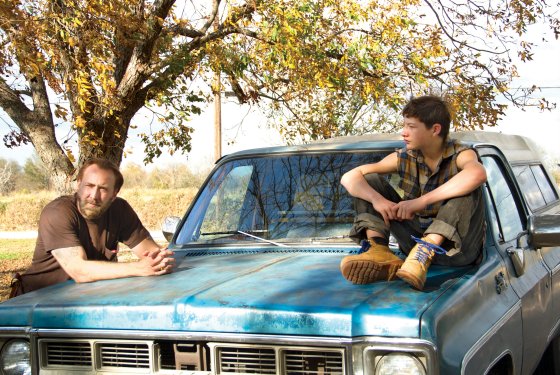 
This latest David Gordon Green (Pineapple Express, Undertow) is a well-acted drama, a dark Southern Gothic redemptive allegory based on the Larry Brown novel reset to an ungainly Texas.

Joe stars Nicolas Cage, Tye Sheridan and the late Gary Poulter as the filmmaker continues to embrace his earlier, even most recent (Prince Avalanche) low-budgeted efforts in what is well-wrought and wrenching at times.

What is gritty, involving and unflinching has dramatic, even operatic flair because of the way Green intensifies the welcome, if diagrammed adaptation by writer Gary Hawkins.

Still, the two main characters, Gary Jones and the eponymous bearded Joe Ransom, a teen and an ex-con, turn out to be more than individuals, very well performed by Sheridan and Cage, respectively.

Ransom (who likes his booze and dalliances at the bordello) alternates between bonhomie and explosiveness as an illegal "tree poisoner" foreman to make a lumber outfit produce better product like pines and isn't in good grace with the local authorities. Even if the sheriff happens to be looking out for his better interests. An avenging local (Ronnie Gene Blevins) might pull Joe away from his inherit pious nature. As he takes in an old flame and gradually warms to job-seeking Gary as an odd substitute of a father.

That's because Joe becomes sensitive to what Gary has to deal with in abusive, drunkard father Wade, a cruelly startling and memorable Poulter. It turns out that the unproductive Wade becomes irate at his impassioned son who impresses Joe with the kind of ethic that shows much maturity for his age. You'll see what the vicious, repulsive old man will do for a drink and some cash.

Joe has its turns that are melodramatic (not as wild as Killer Joe per say starring Matthew McConaughey) and perhaps a little contrived. But the tone that it's set to has a visceral, though hardly restrained punch to them. Which allows for effective character turns for both Cage and Sheridan (so good in Mud) to simmer with convincing vulnerability.

A tale of sacrifice and determination goes a long way as Green works quite well with his technicians, particularly Tim Orr's widescreen compositions and Chris Spellman's designs.