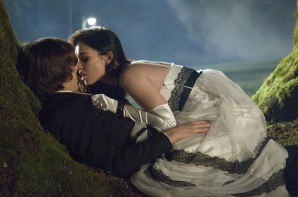 
Megan Fox (Transformers: Revenge of the Fallen) stars in this distaff-fueled horror flick written by Diablo Cody (Juno) and directed by Karyn Kusama (Girlfight). It's not as lifeless as the current stylized, slick slasher pic Sorority Row. But, that's not saying too much.

Jennifer's Body calls to mind pictures like Poison Ivy or like, say, an undead version of Heathers as the gifted Cody specializes in the modern teen lingo and its milieu. It just doesn't has the bite its premise lets on when a newly possessed cheerleader (the seductive Fox looking like a young Kim Delaney) becomes a killer of her (not limited to) male classmates.

Fox and co-star Amanda Seyfried (Mamma Mia, Mean Girls) definitely are actresses on the rise as their characters, Jennifer and Needy, dwell in the small town of Devil's Kettle. Friends since childhood, Jennifer seems to have the upper hand on the relationship based on her great looks. So, Needy finds it easy like everyone else to be dissed by a girl into hot emo band Low Shoulder.

Cody's peppered, but hardly fleshed-out screenplay has the "really healthy" Fox getting a metamorphosis after meeting the band's lead singer Nikolai (Adam Brody). Jennifer, due to a glitch on the "devil's altar", soon finds herself a carnivore, and rather needy, even for Needy's boyfriend Chip (Johnny Simmons).

The possession of Jennifer may be craved by the targeted demographic with sanguine delight, especially after a lurid sequence in a kitchen. But, Kusama, who also made the regrettable Aeon Flux just can't make the conflict involving Jennifer and those in her circle including Needy resonate with hellish veracity.

That doesn't mean that Fox, Seyfried, and Simmons are rotten, because what makes Cody scare just doesn't translate for their characters to deliver on the potential that is ahead of them. Seyfried, good in Mean Girls, endows Needy with qualities that make her teen angst credible, and Simmons shows promise as the fairly classy Chip. And, Fox gets more of a chance to act, though with much help from the supernatural, as the line readings stand out more than any insight into Jennifer and her prey. The ubiquitous J.K. Simmons is saddled in the Irish-accented partially disabled teacher role.

Essentially, Jennifer's Body never takes the risks to lift it above mediocrity in its genre trappings, as it never establishes a mood and nothing really seems to hang in the balance. Darkly ironic underpinnings never surface, so even with the demonly attraction of Fox, there's little heart and soul in this tame, hardly appetizing outing.