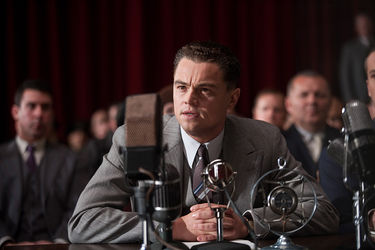 
An ambitious and persuasive, if not truly compelling and fulfilling biopic of the iconic J. Edgar Hoover (1895-1972) has director Clint Eastwood and actor Leonardo DiCaprio together for the first time. The latter sets out a characterization which has connections to earlier roles under Martin Scorsese's guidance in The Aviator and Shutter Island very open to the philosophies of Italian historian Niccolo Machiavelli.

J.Edgar also stars Judi Dench, Naomi Watts, and Armie Hammer (The Social Network) among a larger ensemble. Eastwood is not in top form (closer to Changeling than Mystic River in overall quality)  in this understated approach to arguably the most controversial figures of the 20th Century driven to fight crime while fortifying a clandestine arsenal through a variety of ruthlessness from blackmail to surveillance.

This iconic head of the Federal Bureau of Investigation for almost half a century is depicted with a sense of the paranoid, repressed man's legacy and value of information - clearly absolute power corrupts. Eastwood and Oscar-winning scribe Dustin Lance Black (Milk) don't really position their complex subject in a villainous light as DiCaprio fills him with a strange pre-nominal ferocity starting from the Bolshevik 1919 invasions. An older Hoover (with DiCaprio covered in some heavy makeup) provides much narration to put some U.S. history and politics in perspective, as well as the institution which flourished under the right-wing ideologue's reign.

Black's screenplay has intriguing details about it with much flash-backing into major events that spanned eight U.S. presidents and three wars, but it isn't as adroit and alive as what he was able to service for Sean Penn in the treatment of Harvey Milk through director Gus Van Sant. As some of the key relationships in Hoover's life are unveiled, no audacious edge or affinity comes through what is too often nebulous. For sure, Hoover was cutthroat in his way with those forged through the notion of what being a "G-man" meant.

Hoover was more than close to his imperious mother, Annie (Dench), whom he lived with for a long time. She expressed that he was "destined for greatness," and was right as he started through cataloguing for the Library of Congress. His expertise of through science and standard-operating-procedures would begin to manifest itself when his passion in law enforcement led to the founding of the F.B.I. where he introduced his own methodologies, including fingerprinting. Long before there was "C.S.I", Hoover set up the foundation for the handling of crime scene evidence.

As chronicled in this balanced, but very episodic character examination, a career-defining moment came during the kidnapping of Charles Lindbergh's baby, after which Congress made the offense a federal crime. Hoover's private, rather secluded existence (when not after gangsters and Communists) probably filled with more crisis than the filmmakers wish to expose (those some will like a dressed-up scene) include his staunch secretary in Helen Gandy (an underutilized Watts) and astute, faithful professional and personal companion Clyde Tolson (Hammer, great-grandson of philanthropist/industrialist Armand Hammer, effective especially when it came to not being duly recognized by his close, yet vainglorious friend).

If a dedicated DiCaprio isn't at his best through Eastwood's carefully calibrated strategy (different from the way that someone like an Oliver Stone might want to spice things up), his hard-nosed, harried Hoover does have his moments with those like Franklin Roosevelt, Richard Nixon, Martin Luther King and Robert Kennedy (played here by Jeffrey Donovan). Josh Lucas appears as the shaken aforementioned celebrated aviator, among appearances by other notable character actors, including Lea Thompson as Lela Rogers, Dermot Mulroney as Col. Schwarzkopf, and the always estimable Ken Howard as Hoover's first boss, Attorney Gen. Harland. While there are some powerful and provocative moments in J. Edgar to be had, even an observant craftsman like Eastwood (in unison with his polished production contributors) can't coalesce and streamline it all into complex, affecting drama. Perhaps because it's difficult to establish a crucial riveting framework from what is pretty vague, ambivalent, and unchanging.