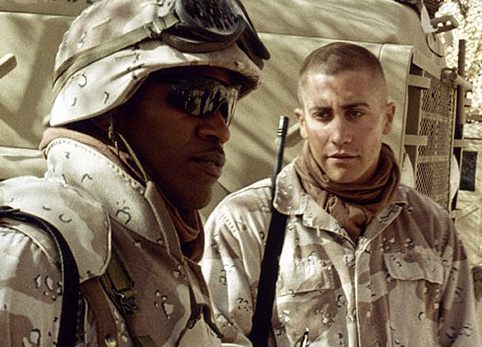 
Sardonic and irreverent, this account of Anthony Swofford's life may have something in common with the tragic and absurd sides of war as depicted in the likes of Full Metal Jacket and Catch-22.

Jarhead is Sam Mendes's film of Swofford's bracing 2003 memoir that stars Jake Gyllenhaal as "Swoff" (Proof), Jamie Foxx (Stealth), and Peter Sarsgaard (Garden State). Many may think it's a war film and Mendes (Road to Perdition) draws from earlier genre pictures, but this unique commentary from the Persian Gulf War experience has a dark, subconscious energy to it.

The script by William Broyles, Jr. goes to show that the Gulf War wasn't Vietnam and how a Marine soldier was prepared for combat ultimately deemed unnecessary.

Our eyes and ears for life on the hot sands of the Middle East is the narration of Swoff (Gyllenhaal), a third-generation military guy, pretty observant, though not really of high intellect. Not much exposition is given to his involvement which would coincide with the US's initial offensive into Kuwait. Tony has a comely woman on the homefront but has amusing insights as he waits for action to happen. He trains effectively in surveillance to be in the Target Acquisition/Scout-Sniper platoon.

The early basic training leads to Saudi Arabia as Lt. Col. Kazinski, a pumped-up Chris Cooper, fires up the squad against the Iraqis. It gradually becomes clear that this acute anecdote doesn't have much political conviction as the troop demobilization intensifies.

Once the troops are situated for battle with chemical warfare looming, Jarhead, the self-imposed name of the Marines, is more existential in many ways as the Marines are seen playing football with gas masks in the sand. With little to do for long stretches, they know how to make themselves feel better, at least for a few moments. It includes nagging each other about the possibility of their straying wives and girlfriends.

There's gritty work by Foxx as Staff Sgt. Sykes and Sarsgaard as Troy, Swoff's friend and mentor, really loyal to their elite STA Marine division. The intriguing direction by Mendes has artistic, haunting images from the incinerating of oil wells to the Iraqi victims severly burned. And, Gyllenhaal is able to anchor things around thoughts of a million-man army with some sharp awareness, not just on a physical level.

But, similar to the clandestine goings-on with the use of the gas-masks and the assertion of the absurdity of war, there isn't the emotional underpinnings and shrewd impudence of something like Three Kings. Yet, Mendes has crafted a cinematic diary with little melodrama of something like a Platoon. The music and visuals capture the weary, austere mood of what life is like when "the earth is bleeding." The effects are efficiently conveyed with the unprotective ochre outfits and grainy lensing in deserts in Mexico and California. For its ominous wit and honestly portrayed episodes, the result isn't as penetrating as what blazes on the desert fields against an enemy they know little about for a cause they hardly understand.